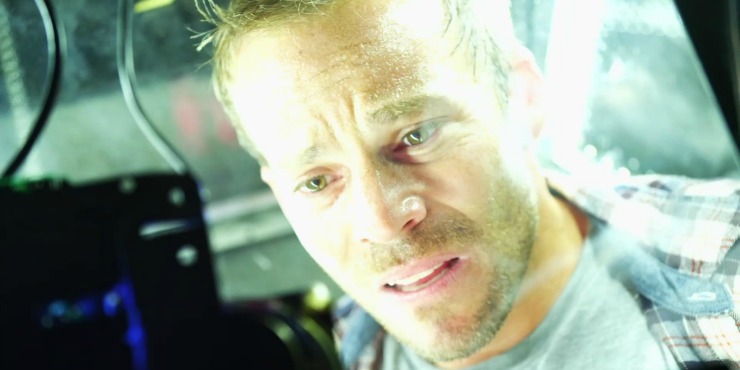 You can really appreciate a quality ironically by the number spin-offs or in this films case clones or films with similar scenarios. Rodrigo Cortes 2010 film Buried starring Ryan Reynolds is a highly underrated film which oddly enough hasn’t seen any ‘clone’ films, just a few similar scenario films until now, Brake starring Stephen Dorff. So is Brake another Buried or simply a test of character for an actor for an actor who for many years puzzled us all why he hasn’t excelled in bigger parts or is the film a test of how much claustrophobic you maybe?

What Appears to be a random kidnapping into something more sinister when Secret Service Agent Jeremy Reins (Dorff) discovers he’s being used as a pawn in a terrorist plot. Watching the clock tick down to an unknown catastrophe. Jeremy is forced by his captors to listen to the outside world on the brink of collapse, knowing the only way to save the people he loves is to divulge a secret that he has sworn to protect.

The first question you’ll probably ask, is Brake a ‘Buried clone’? The answer is yes but the answer is also no. The basic set up is the same (enclosed captive who has no clue why he is there or who is responsible), but as the film progresses we gradually move away from the Buried plot with the film going in its own direction.The story is kept intense, engaging with a few twists thrown that make you think twice ‘have I really sussed the plot?’. Things do work really well until the end things go pear shaped probably thanks to an eccentric flawed script which give the film the ridiculous 24 tv episode feel (though I am a fan of all things Jack Bauer).As the flaws happen right at the end of the film this could leave you in a forgivable mood because of the timings or the total opposite frustrated and wonder why have I just wasted 80 minutes of my time watching this film! What’s more confusing is at no time do we get a reason on why the film is called Brake?!

As for Stephen Dorff, in Brake he may not reach the same emotional levels Ryan Reynolds did in Buried, however, Dorff does deliver a really strong performance commanding the screen in a film that many another actor may have stumbled at. The film also proves he can hold a film on is own and he may have starred in a howlers as well as many ones hit wonders like Sofia Coppola’s Somewhere proves he does possess the acting chops to do bigger and better things.

Brake is an enjoyable tense thriller and if you can forgive the ending this film will be worthwhile your time which Buried and 24 fans will enjoy.