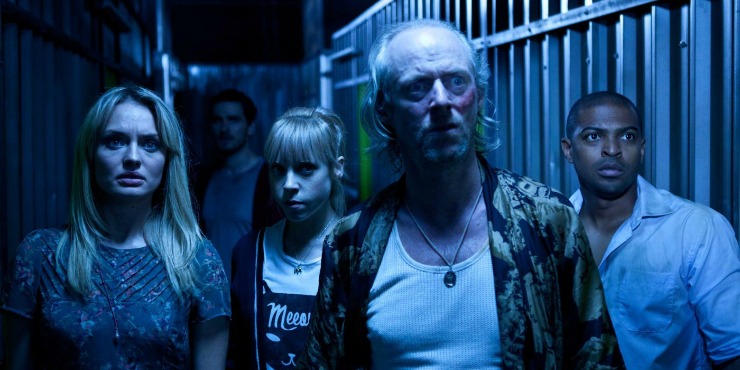 Noel Clarke is a Jack of All trades as it’s hard to think what h hasn’t done already in front as well as behind the camera: actor, director, producer, writer, twitter-a-holic.I’ve always had the up most respect for Clarke despite many of his films might not be the biggest box office film, however, he is a man with talent with a lot of conviction, passion, full of passion for his craft. So what hasn’t he tried yet? try Sci-fi horror as aliens go urban in London in Storage 24.

When a military plane crashes in London the classified cargo is let loose on the city. Unaware the city now under threat mild-mannered Charlie (Noel Clarke) goes with his best friend Mark (Colin O’Donoghue) to get his belongings after a bad split with ex-girlfriend Shelley (Antonia Campbell Hughes) at the Storage Facility, Storage 24. With tensions  already rife in the air things get worse as Charlie meets Shelley at the Storage where she is collecting her own belongings making things even awkward  especially when Charlie still has feelings for his ex. As things heat up and start to clash  the storage facility’s power dies and the building goes into lockdown, as Charlie and co attempt to find a way out. It doesn’t take long for them to realise there not alone and that something deadly is hunting them down one by one in a building designed to keep things in. Will they live long enough to find a way out?

Take Noel Clarke out of the equation Storage 24 is set up for critics to destroy especially as it’s directed by Johannes Roberts whose last film F was nothing but dreadful. It was on that basis I actually bypassed Storage 24 when it was released cinematically in the summer&nbsp, so when I was offered the film to review for the home release I thought why not! I was very sceptical before I played the film but I have to admit I was presently surprised how much I actually enjoyed the film. Storage 24 is neither a great film nor is it a bad film, what the film does do well is take the basic elements of the tried and tested monsters  hunt human scenario creating something very tense, menacing time with some nice jumpy moments. Thanks to a recent script originally written by Clarke which is unpretentious but using the storage facility as the setting was actually a good idea, not highly original but a smart move.

One thing many sci-fi or even horror tend to forget these days is to  keep the claustrophobic tension running throughout the film. In Storage 24  apart from the first 20 minutes of soap opera dramatic the claustrophobic tension really excels in this film especially when Charlie is forced into the air vents. As for the alien itself looks like Johannes Roberts has twisted Clarke’s arm to annoying his old friends at Doctor Who as the alien looks like something from an old Dr.Who episode as its clearly a man in a rubber suit. It does look silly at times making the monster feel a little one dimensional however it does actually for this film as the CGI would mad things look a lot worse.

Like or love him Noel Clarke is the star of the film keeping  you interested&nbsp and compelled in the film from start to finish.Clarke has proved himself once again a top notch jack of all trades in the UK tv and Film industry you’re sort of left wondering what can he do next as he’s nothing to prove in his homeland. With next summer’s Star Trek In Darkness coming maybe this is the move which will catapult him into a bigger audience into tinsel town and prove to Hollywood why he has such a great reputation here in the UK as he deserves it.

To be honest with all we like about Charlie he is also very predictable too even when he’s in the hero saves the day mode.The rest of the cast due to the film’s story you end up not liking much they are awkward in their actions as well as dialogue. This is a film that doesn’t take itself too seriously nor does it think itself as a comedy but there are a few comedy moments that prevent you from fast forwarding. Ned Dennehy  plays the paranoid disillusioned husband who hides from his wife by living in the storage facility but we mustn’t forget about our battery operated toy dog who delivers some light hearted humour!

Storage 24 might not be a highly original film but it’s a fun film which has a nice revelation at the end (I won’t spoil it) which could be exploited in the future, we also mustn’t forget its a British film too! It might not be at Hammer films quality but it’s a reminder that here in blighty it’s not all about 4 Weddings And A Funeral rom coms nor gritty London Gangster films that British sci-fi films can boldly go where no British film has gone before (for a very very long time).