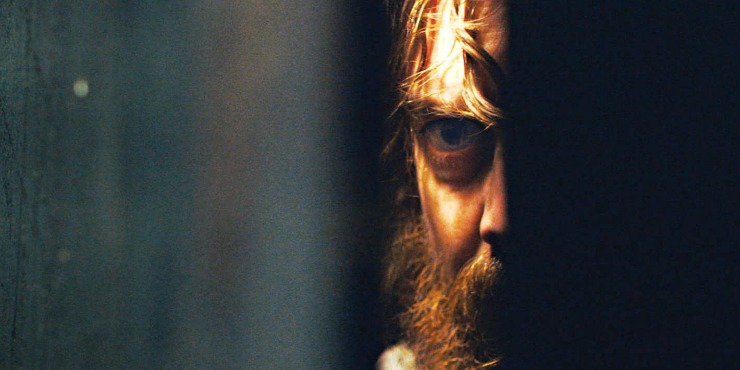 If there’s ever a fine example of a film to showcase the notion that you don’t need a big budget, snazzy VFX or even have the big name cast to deliver a powerful film, Jeremy Saulnier‘s Blue Ruin is that movie.   A cautionary study of revenge, Catharism that’s tensely gripping and proves low budget filmmaking does work, especially in the right hands.

Blue Ruin maybe a film with a cast of unknowns but when it comes to unrelenting gritty tales of revenge it put to shame to its mainstream genre predecessors. You may say ‘Blue Who?but when you snag an award at the film’s most glamorous film festival Cannes people take notice, even mainstream Hollywood blockbusters get jealous.

In Blue Ruin we meet Dwight (Macon Blair) a bearded man, longhaired in a house only to learn he’s a vagrant and the house he is in, he’s nothing but an unwelcome ‘guest’. Dwight’s ‘correct’ home is his rusty old Blue Pontiac Bonneville (possible reason for the film’s name) car which he’s parked up on a beach front a source for food he searches for in the dumpsters. One morning Dwight is suddenly awakened by a Police officer whom he fears is here to arrest him for breaking into a house, but she assures him he’s not in trouble. However the news is still not good news as the of retribution arrives as the man responsible for killing his parents 20 years previously has been released from prison, Que revenge.

The key to any successful film is drawing your viewers into your film’s premise and Blue Ruin does this perfectly in the first twenty minutes. From the first minute, we meet Dwight in a stranger’s bathroom, your curiously gripped, intrigued to learn more about   him and his choice to live a vagrant’s life. Emotionally detached from the world and his only remaining family his sister most of all he is fueled with determination.What really drives this film is that Dwight is no superhuman   but an ordinary man overpowered by his emotions, someone you wouldn’t think twice of killing anyone not even a fly. He doesn’t even think twice about how foolish his actions are nor that killing his intended target will end his anguish, far from it.He forgets his parents killer has a family too &nbsp, and his actions will only antagonise   them. It’s evident Dwight is no killer he may have passion but his biggest flaw will be attempting to performing the revenge itself. His struggles give Blue Ruin a big edge of realism, no matter what position a broken man is left with no option he will fight to his last dying breath.

Blue Ruin is revenge thrillers in it’s most powerful minimalist form, a study of tension in the eyes of a man whose fate is sealed by the minute he (Dwight) to the feel of his first weapon. Jeremy Saulnier has not only written, directed this film he has escalated the importance of a powerful score to showcasing that Silence is golden. Used wisely like in this film has a scene with no or very little dialogue you can deliver as much devastation as a dialogue driven thriller.

Masterfully shot, modestly pace Blue Ruin is one of  the best visceral films you’ll see this year, you’ll find no better film to showcase a normal man demise unravel in front of you. All largely thanks to Macon Blair’s superb, emotive very convincing performance as a fragile man on a downward spiral to his doom. Saulnier’s direction, vision and storytelling is solid, suspenseful, atmospheric, tense, comedic driven film. Despite it’s indie credentials the film sits perfectly amongst the so called big players delivering revenge thrillers the only way the should be best served, cold.