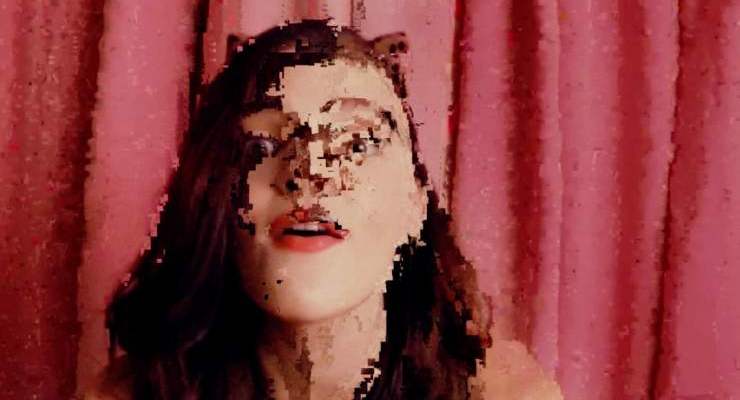 The Internet can be a wonderful tool for discovery, for educational and entertainment needs. It’s also the place to go for your cheap thrills and you would be forgiven to think Daniel Goldhaber, Isa Mazzei‘s Cam is delivering some.

As Alice struggles to take control of the situation, her replica starts to push the boundaries of her internet identity. Taking that identity to places Alice dared to go or go on camera in a way to effect and ruin her life off camera.

As she attempts to regain what she’s lost, She slowly drawn back to her show and the mysterious person who took over her place.

From the opening minutes of Cam, we see Alice stoop to some dark places with a ‘fake suicide’. Attempting to block a ‘fake user’ who wanted to see ‘bleed’. It’s all for popularity to climb up the site’s chart as Alice targets the other girls. She even goes as far as sharing a cam session with another girl eventually her doppelganger does it for her.

Whilst she coerces her viewers/regulars to ‘tip her’ with bitcoin/tokens, she still can’t reach the top of the charts. That’s until the replica takes over.

Cam does well to show off the seedier side of the internet. Men (and some women) like to hide behind their keyboards, throwing money and tokens at the girls for their sexual kicks. If they had a chance of a sexual encounter face to face with one of the girls they would run a mile. If anything the film is a character study with a glimpse into what motivates and drives someone. How much of your dignity are you willing to give up?

Cam doesn’t deliver any solutions to Alice’s problems. It’s an existential tale if anything. Madeline Brewer does really well to carry the film from start to finish as shes virtually in every scene. An optimistic girl who wants to do better for herself whilst trying to keep her online self and real-life self separate. She knows her loved ones would disapprove.

A tale that reminds you of the lyrics of the old classic Orange Juice song. ‘Rip it up and start again’, if you know technology its a wise move, though those who want to damage you will find a way. A solid debut, nonetheless.