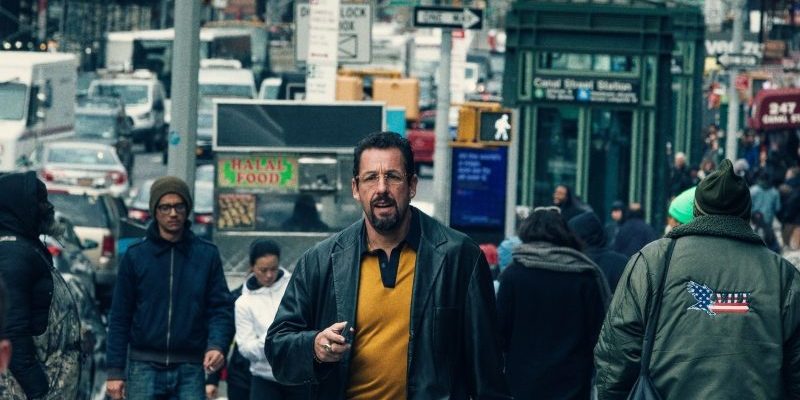 For many years I’ve not hideen my dislike for the majority of Adam Sandler‘s filmography. I could easily count all his films I’ve enjoyed on one hand with several fingers to spare. 2020 that hand now has one less spare finger with the Safdie Brothers Uncut Gems.

Ben and Josh Safdie introduced themselves to the world with critically acclaimed Good Time (2018), that won them many fans worldwide including Martin Scorsese. It’s all thanks to their gritty portrayal of their home city of New York City. Ironically Marty is onboard this film as one of the executive producers, a film that plays out like a love letter to the iconic director.

As I mentioned earlier for someone who is no fan of Sandler, it feel kind of strange to be reccommending one of his films. So what is he doing differently that’s failed miserably elsewhere? There maybe sime improv going on here, the scripting was left scripting to the Safadie brothers. Leaving the most important factor for Sandler to focus on, the acting.

So what’s Uncut Gems all about?

We find ourselves in New York City in 2010. Howard Ratner (Sandler) is a charismatic jeweller with a questionable reputation. Juggling his work life with didgy cash deals and extramarital engagments, his wife can’t take anymore of his bullshit. Howard is also a compulsive gamblers and takes on so many risks, pawning goods to feed that addicition. His debt is rising fast and his brother-in-law Arnl (Eric Bogosian) and other loansharks all want their money.

Howard is always on the search for the next big find that will him the readies. When he gets his hands on a rare Ethiopian 5000 Carat black opal he thinks all his prayers have been answered. When one of his shady acquaintances (LaKeith Stanfield) brings NBA legend Kevin Garnett to his shop, Howard has found his potential buyer. Encouraging him to bet big on one of his games.

Naming Sandler’s character Howard Ratner was a stroke of genius which will get a few extra smiles and giggles from British viewers. Howard shares the surname with Gerard Ratner the former CEO of Ratners Jewellers who shaped his family company into world’s biggest jewellers group. Only to see it collapse like Jericho’s Walls when he joked that one of their products was ‘total crap’.

The opening scene will be an eye opener , kicking off deep in the bowels of an Ethiopian mine which they find the rare opal. Only to leave that mine via Howard’s own bowels as he gets an endoscopy, setting the film’s edgy tone and that this is no ordinary film.

You could say Uncut Gems is like a 2 hour anxiety attack and Howard’s particular. We see him go through a rollercoaster levels moderate to extreme and when you live the life Howard does we expect nothing less. All thanks to his dodgy wheeling and dealing, he’s always on the go rarely stopping just like New York, the city that never sleeps. Darius Khondji’s camerwork perfectly captures that frenetic pace which leaves us exhausted.

Adam Sandler is superb (yes I said superb) as Howard an all round schmuck. You geniunely feel his passion as well as his pain, living on the edge and gut instinct. He has a motormouth, he’s a piece of shit though you end up loaning him some of your empathy even some sympathy.

Uncut Gems has put the Safadie Brothers firmly on the cinematic road map. The film might be relentlessly exhausting, it will also leave you engrossed. Sandler has made an unlikable Ratner likable. Be eagle eyed and look out for a funny voice cameo from Tilda Swinton! I’m off to a dark room to lie down now.