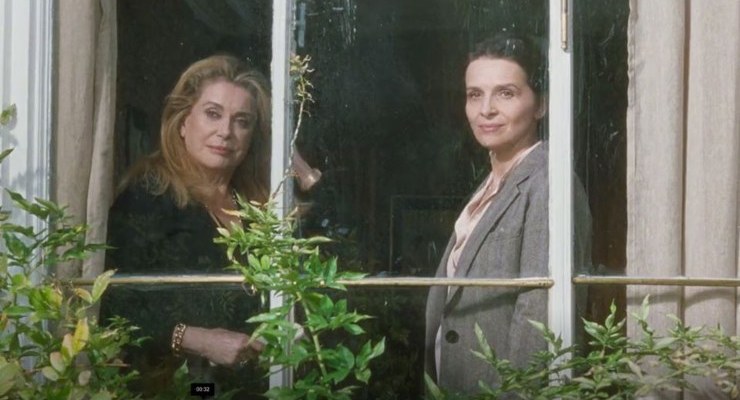 Japanese Filmmaker Hirokazu Kore-eda is what you would call an expert at painting the portrait of  family life, intimate even social commentary much like the way Bong Joon-Ho does it. For Kore-eda’s latest film it’s another first for him, his first Non-Japanese language film, The Truth (La vérité).

The family dynamics are explored through a mother-daughter relationship that’s walking on eggshells. As home truths fly, but those truths aren’t coming from the person you might be expecting.

French screen legend Catherine Deneuve and Juliette Binoche as mother daughter, together sharing the screen for the first time ever. In The Truth, Deneuve plays Fabienne a French  movie icon, an imperious diva whose been there, done that, now wrote the book. At home she’s still the boss, the matriarch, and at work she still commands respect from her peers.

She is someone that seems to suffer from momentary lapses in memory, despite this she decides to have her memoirs published. Fabienne’s daughter Lumir (Binoche) decides to return home to Paris from New York with her husband (Ethan Hawke) and daughter to

celebrate the release. This is before she even read a single page , as soon as she started, sparks fly. Rightly so Lumir is very upset at her mothers version of the events straining their relationship . Confronting these issues they take a possible, poignant journey to reconciliation.

Fans of Hirokazu Kore-eda expecting vintage Kore-eda you might be disappointed. The Truth is not a terrible film, it does possess some of those trademark touches we love about the director’s films. It’s certainly lightweight but not in a disrespectful way. Those little touches that are there do remind us why we love the Japanese filmmaker’s work.

The biggest draw of this film is Catherine Deneuve. She plays Fabienne perfectly, like Jekyll and Hyde we see two sides of her. In the public and on set she embodies her Diva persona in the presence of fellow cast plus those who serve her daily needs. When she’s with Lumir and her family she is stubborn and even admits to exaggerating things especially in her memoirs. This irritates Lumir when her mother reveals what she did to a former actor to get a role. Also Fabienne does also tend to change her version of things when people remind her of it.

It’s on set of her latest film that brings Fabienne back down to Earth.  She’s nothing more than a has-been who has a drinking problems whose done and said things to progress in her craft. Even if that means  neglecting and neglecting those who genuinely care for her including her children.

The Truth isn’t vintage Kore-eda. It may lack tension and the support cast feel devalued (principally Ethan Hawke). The film may not exactly answer the themes on reflection or relationships, however the dialogue is intelligent which is funny at times. An delightful performance from Catherine Deneuve with Juliette Binoche equally good, their chemistry is one of the films redeeming lights. Enjoyable at times forgettable  family drama.