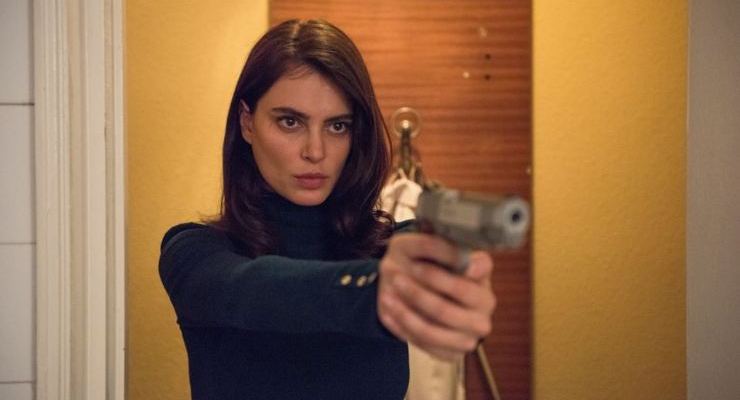 Corneliu Porumboiu is a big player in the Romanian New Wave Cinema with Police, Adjective (2009) his most well known creation. His films are not known for their commercial friendliness, more deadpan, realism. Eleven years on Porumboiu’s The Whistlers is released and it’s his most accessible film to date. A stylish noir inspired playful thriller.

In The Whistlers, Cristi (Vlad Ivanov), a middle aged Bucharest Police Officer who seems to be under surveillance from his superiors. For good reasons, he’s as corrupt as the individuals he’s involved with. A vicious circle between his superiors and local mafia in a complicated situation.

We first meet Cristi on a ferry boat to the Canary Island of La Gomera (the film’s alternative name). When he docks he’s met by someone who questions him first then takes him to the islands mafia boss. It’s here we meet Gilda (Cartinel Marlon) also who has met Cristi before. The pair met in Bucharest  when we learned about Cristi’s surveillance  including his home. She pretends to be a high class escort, the pair have sex. So when the reunite she tells him “Forget what happened in Bucharest, I did it for the security cameras“.

On the island the local mafia boss Paco (Agustí Villaronga) needs Cristi’s help. He needs him to get one of his associates Zsolt (Sabin Tambrea)  out of a Romanian jail. He’s behind the money laundering  from his bed mattress factory. With his every move been tracked, Cristi  quickly learns the ancient art of Silbo, communicating through Whistling. Used by the criminal gang, impossible for the Police to crack.

In the opening minutes of the film, you know The Whistlers won’t be your usual Romanian New Wave miserablism. New Wave films are usually set within their own borders, this one heads to Spain. It’s not all the gloomy grays, there’s yellow and blue skies. The raw power of Iggy Pop‘s ‘Passengers’ teases the film is going to be playful in nature.

We quickly learn that everyone is out for themselves and all have their own agendas. No one can be trusted , not even the police. Probably the only trustworthy person is Cristi’s mother who thinks her boy is just a big letdown. It’s also hard to pin down who are the true villains.

The Whistlers tick all the boxes for an modern noir. The most obvious is Gilda herself who also happens to be the titular character of a classic 1946 Film Noir with Rita Hayworth. The classic Femme Fatale , beautiful, cigarette smoking seductress , who seduces Cristi with great ease. Porumboiu has crafted a multi-layered neo noir from his love from sub-genre. You can see elements of Orson Welles Touch Of Evil, Fritz Lang films also the master of suspense Alfred Hitchcock.

The Whistlers doesn’t overburden itself with over complicated narratives. Double even triple crossing characters and a brilliant use of an ancient form of communication /Morse code. A slick , fast paced thriller that will have you checking your back for knives.