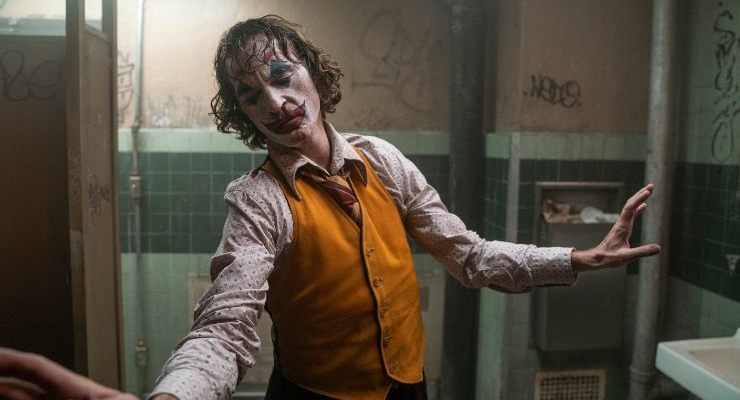 ‘Smile be happy‘, you will be if your the CEO of Warner Bros Pictures. Todd Phillips Joker may not be your ‘average comic book movie’. Nor does it have to be or need CGI or spandex characters to deliver.

As I write this review, the film has just picked up two Oscars…Best Actor, Best Score. It may have only won two golden statues, the Joker was considered to be one of the most divisive movies of 2019.

How can a film that made it’s world premiere  opening  the Venice Film Festival get an 8 minute standing ovation? A film that split many of us? Is it because it’s directed by the man behind The Hangover movies? Or has  he ripped the soul from the Batman mythology? Or  did many people go into the movie with high expectations? We could go on forever here, The Joker critically was divided, it was the biggest box office R Rated in cinematic history. Money certainly talks. 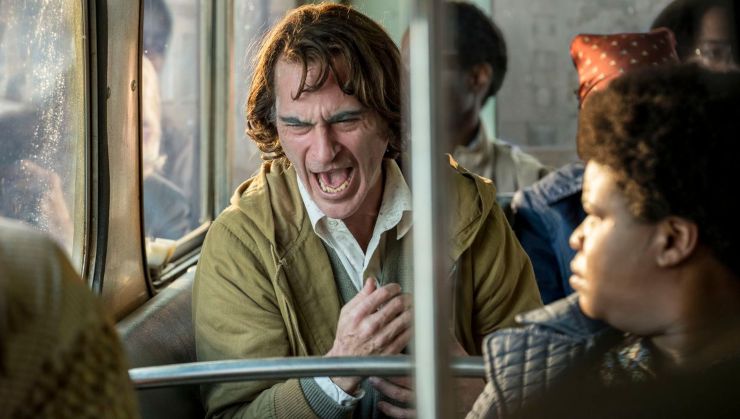 Heather Ledger made the Crown Prince of Crime his own with his masterful performance in The Dark Knight. Joaquin Phoenix‘s Arthur Fleck has got some critics/fans asking who was better. The simple answer is both were equally measured and compliment each other. It would be wrong to judge both as both actors brought humanity to the character, be it the dark side of humanity.

Joker is been sold as an ‘origins’ story, if that’s the ultimate origin story that will be entirely up to you.

We find ourselves in 1980’s Gotham City, the city is falling apart, dirty. The people are drowning in the rubbish left to rot in the rat infested streets. Arthur Fleck  lives in a run down apartment block in the city with his ill housebound mother (Frances Conroy).

When we first meet Arthur, sitting in front of a mirror putting on his clown make up. His figure is skeletal and works as a clown for hire, making ends meet.  In between his shifts he attends weekly meetings with his social worker. For his Neurological condition, which at times makes Arthur  burst into bouts of non stop laughing.  He even has a card explaining his condition to any bewildered or concerned onlookers.

Arthur also has aspirations to be a comedian. He uses the diary he was given from his social worker for his ‘jokes’. His mental health declining quickly Arthur is mugged, harassed and bullied and now jobless. Things get tragic when he kills 3 business men threatened, beat him. The tragic events see his life descend to the lower depths of desperation.  He snaps , shoots whilst dressed as a clown and now Arthur is wanted by the police. He also becomes a hero to Gotham’s disfranchised citizens.

If you are looking something that plays like the recent Avengers films or even Harley Quinn, think again. The Joker is not made purely for the fan boy or girl. It doesn’t mean you won’t enjoy it either . Very few comic book characters could pull this type of film off. In a world where spandex characters born with superpowers, Arthur has none.

This is presented as an origin film based around the birth of Batman’s greatest rival. The Joker never clearly states Arthur is the ultimate. Joker. If you know the DC Universe there’s been more than one clown prince. Todd Phillips has created a allegorical wet dream, that tease Arthur might be the one but never giving too much away.

The film maybe set in the 1980’s, what is happening in the film is reflective of current times.  Thomas Wayne is our Donald Trump (even Boris Johnson), a populist elite who is all talk very few actions. The media sway the general public to push their agenda whilst religiously demonising those who want a more truth outcome.

The opening Scene we hear news broadcasts which set things in motion. The camera shows pan around the streets showing how rundown the city is, buildings crumbling.  The city is in a economic crisis as the private companies  rule the roost and fat cats feed on the profit. Pretending to provide services they make profit from, Arthur is face of  the forgotten who rely on the services.

When we’re  introduced to Arthur, your asked if he deserves our sympathy or even empathy. He’s a lonely dishevelled malnourished man and after the turning point of his life we clearly know he deserves nothing. His mental state is a cry for help not just for Arthur but the funding it no longer gets. The health system is in dire straits.

Joaquin Phoenix‘s performances is mesmerising. His psychical skeletal appearance (alot like Christian Bale’s in The Machinist) is extraordinary. He takes us deep into the Abyss of his heart which dark and cold. Playing a man beyond sanity, narcissistic, disturbed . The dance scene was his transcendence into pure evil.

Arthur Fleck is no Travis Bickle but shares similarities with Robert Pupkin in The King Of Comedy. Arthur is more at home with Michael Rooker in Henry: A Portrait Of A Serial Killer, Michael Douglas in Falling Down. Pitiful mam who dances to Gary Glitter, stabs former work mates to death.

The Joker maybe the most divisive movie of 2019, it’s not for everyone. It’s a raw, unrelenting violent flick that will disturb some. Thanks to Phoenix’s magnetic central performance and a brooding score from Hildur Guðnadóttir. This is the closest you’ll get to an Shakespearean comic book tragedy on the big screen. I won’t go as far as calling this a masterpeice, but boy what a movie!