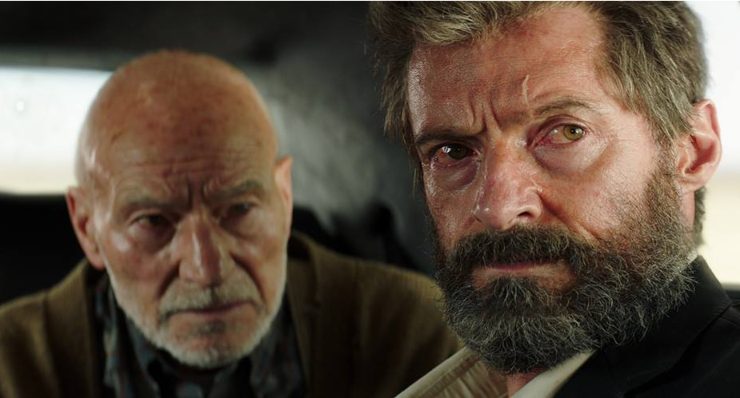 A question I’ve always been asked when comes to comic books and their movies ‘Why Don’t I like The Avengers or Captain America?‘ Simple one word X-Men or should I say Wolverine. I always remember in my late teens going to my local comic book shop picking up only Spider-Man and X-Men comics, that was 30 years ago. 17 years ago Hugh Jackman let loose the pain with his first pair of Adamantium claws in X-Men(2000) when he was in his early 30’s. Nine movies on we have Logan now old, tired, angrier Wolverine who is ready to say goodbye in a movie his fans desire and now you can own it too.

In Logan, we find ourselves in the near future, the year is 2029 and our heroes find themselves in an old smelter factory near the Mexican border. You could say it’s dystopic era from the newspapers, the radio even the conditions people are living in. Logan (Jackman) is a lot older, in pain with all his great healing powers all but disappeared. It also looks like the world there’s no mutants or any that’s still alive are living underground and on the run. Now caring for a frail, very ill Professor Charles Xavier (Patrick Stewart) who is showing early signs of Dementia. He wants to escape humanity by escaping on a boat and is paying for that chance as a Limo Driver, but his pain is getting worse and not even the drink can ease the pain. He’s now a shadow of his former self.

When waiting for a client he’s approached by a mysterious, frantic woman (Elizabeth Rodriguez) who pleads for him to look after the young girl with her near mute Laura (newcomer Dafne Keen). Eventually, he does and only to learn she’s a lot like him, a mutant. Before he can bond with her at his hideout the pair with Xavier is forced to go on the run tracked by the Reavers bounty hunter lead by Donald Pierce (Boyd Holbrook) on behalf of Dr. Zander Rice (Richard E Grant) who has big plans for her.

Once again our hero finds himself a father/mentor figure for a young mutant once again. Laura has the past just as tainted and troublesome as his. Her abilities look very familiar, Xavier can see this but Logan struggles to admit as all he wants is get her to Eden, but what is Eden?

Logan is the most profound, grounded comic movie you will this year. Loosely based on the graphic novel ‘Old Man Logan‘ by Mark Millar and Steve McNiven, like Nolan’s Batman movies Marvel finally has a live-action movie grounded in realism. There is a scene when Laura is reading an old X-Men comic (which has the old school blue & yellow Wolverine on the cover) which Logan mocks the notion that Superheroes are ‘real’.

There’s talk that the movie shares similar parallels to the classic old Western Shane(1953) starring Alan Ladd. A story of a loner wants to settle down, forced to become a ‘parent’ making him face those conflicts he’s running from. In the same comic book scene with Laura, they even have the movie playing on the television. From the origins of the Wolverine comic book, there’s that mythical Toshiro Mifune to a Samurai type warrior loner.

The Chemistry between Jackman and Stewart is first-rate, the pair truly relishes their jousts, quips, and F-Bombs. The mere thought of the Great Charles Xavier saying ‘Fuck’ just brings a smile to anyone’s face, nor does the use of profanity ruin the movie either.If anything we do get a comedic levity and at the same time convinced the great professor of the school of gifted children is losing his powers. Stephen Merchant also lives with the pair in a subtle support role as mutant Caliban, but all the plaudits as for young Dafne Kean who delivers a superb performance like a seasoned pro.

Logan is a dark, visceral, gritty movie that delivers the promise if blood and action from the word go. This is a violent movie but is one that also has plenty of emotion and compassion. We do love our comic book movies but there’s only so long we can take ones with Spandex character. Now we have Logan a movie that grows up like it’s fans.