Most of us are used to going to cinema’s in UK to those big American Style multiplex out  of town cinema with 10 or more screens with all the latest big blockbusters, everything in big scale including the ticket price.

Some people are fortunate to been in a town which still has the old style art deco town centre Picturehouse, I’ve also experienced cinemas in Greece and Italy too. Many in Greece are big open-air in main holiday resorts, Italy has a mixture of old and new cinemas, recently I got back from China visiting my girlfriend and before I got there she told me she wanted to go to the cinema so I got very excited on the prospect of visiting cinemas in another country.

So how different are the cinema in China? not really much difference. If you are a shopaholic and will be coming to south China I recommend visiting Guangzhou, it’s one of the best shopping destinations in the area, you’ll find everything here including prices to suit all tastes and pockets. The city is full of many Shopping centres, malls and plazas and a lot of them about 4 to 8 floors high usually with a cinema in one of the higher floors if not the top floor.

In currency terms, 10RMB Chinese equals about £1 GBP and in the Glasgow area an average adult cinema tickets cost about £7GBP, so the first cinema we went to I get about 150RMB ready, how surprised I was! it was only 40 RMB each (£4GBP each)!!! Many of these cinemas are not massive some only have 3 or 4 small screens up to about 7/8 screens and the first cinema myself and Michelle (my girlfriend) went to was the cinema in Grandview Plaza in Tianhe district.

This Plaza is 4th biggest shopping centre in the world, its a shopper’s paradise, the cinema was located on floor 7 and I was just so excited that during my time here I can enjoy my favourite pass time of going to the cinema and even better to share it with my beautiful girlfriend. I like my munchies and a coke and some popcorn was a must she wanted some popcorn and a minute maid orange juice 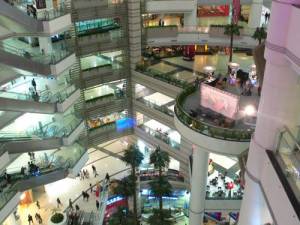 , I got a Pepsi. When I buy popcorn and coke at home it’s about £6GBP, once again I was shocked at the price, only 24RMB in total (£2.40!!!). The popcorn is a little different more butterkist style rather than plain style in some UK cinema’s, but still good stuff, I just love the prices just like the good old days!

I and Michelle went to see several movies: Night of the Museum 2, Terminator Salvation, Harry Potter and Half-Blood Prince and the first movie was Transformers The Revenge of the fallen (watch out for reviews of all movies). I was just so eager to witness how the Chinese experience cinema compares to the British experience, also I was curious to see how the ushers, box office worked been a former usher/cinema worker myself.

I love my trailers plus I am a sucker for the Orange mobile adverts, there cheesy but have the odd funny part. The times advertised in the UK usually include the 15-20minutes of the ads and trailers and when I watch the trailers I love saying to myself when I hear people say that was I say “well if you went online to the peoples’ movie’s blog you would have seen that 3 months ago!!!”. We get greeted by the usher who takes tickets at the entrance to screen which I think is slightly better as at home the usher would greet you at the start of the hallway leading to screens. Another thing different is in China they still have the old style pick a seat number and sit there instead of free for all.

we take seats and everything starts, where the trailers?? No trailers? Arrgghh!!! The movie starts right away and this seems to be the way things are here in this country cant complain. The whole atmosphere is so laidback, even up to 30 minutes into movie people are still walking in. The screen is full, about 300 people I say possibly more, lots of fanboy types, the Asians love their robots (or mecha), plenty adolescent and older teens drooling at those big shiny ‘bots!

My girlfriend was so excited she was going to the cinema, like a child set loose in a toy shop. She told me she didn’t really like going to cinema herself which is true for a lot of people, but I think it could be seen as a sign of the income many Chinese people have £4 to them could be like £10 to any Brit. She got so mesmerized on whats going on in the movie, gripping onto her popcorn munching every little bit, I think its been long time since she’s been to the cinema.

At one point she points of the movie she turns to me and says she’s very beautiful (Megan Fox), but being the loyal boyfriend, not as beautiful as you. She thanked me, but I never got a kiss in return. Transformers was ok very cheesy. I personally think Megan Fox cant really act, shes just in there to add sex appeal (and it works).She reminds of Kim Basinger in 1980’s, who wasn’t the greatest actress in the world usually ending up in erotic movies (she was very sexy) or the screaming girl like in Batman 1. Maybe twenty plus years down the line maybe Megan Fox will mature like Basinger into a better actress only time will tell.