Who is Jacques Mesrine you may ask? Last Friday (8th) the UK saw the release of the 2 part bio-epic of the man, and in this article/post, I hope to shed some light on who he was and also some info on the actor who is playing him. 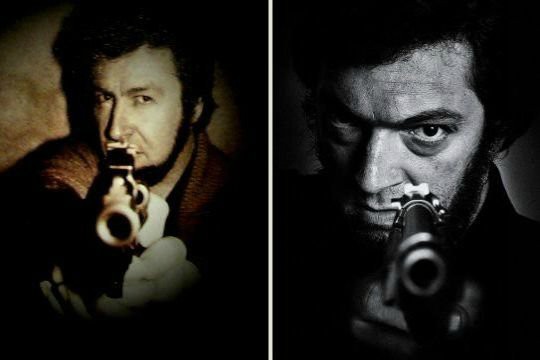 Jacques Mesrine was born in Paris on December 28th, 1936 to a middle-class family, in the Clichy suburb of the city, not too far from where he met his death. From an early age there were signs that he was going to be trouble; after being expelled from College de Juilly due to aggressive behavior.

Outside of his native France, he is unknown but in his homeland, it’ss a different story. Eccentric and outrageous, Mesrine (or Mer’rine as its pronounced silent S) has been a forefigure of French media for over 30 years. A bank robber, kidnapper, escape artist, womaniser, fugitive and wannabe revolutionary; he even beat Princess Grace of Monaco!

Despite being a womaniser, Mesrine did have a number of glamorous girlfriends (even a

short-lived marriage into Lydia De Souza in 1955) always courteous and gentleman-like (even to those he robbed from as well!). He was obsessed with the high life, good homes, food, drink and the best and latest fashion which he even wore when he robbed. He lived life dangerously and enjoyed risk-taking. His passion for precise and military-style planning made him a hard man to stop.

After his short marriage in 1956, he became a paratrooper for the French army, in France’s “dark” times during the occupation of Algeria. He witnessed and allegedly took part in torture squads and on his return to Paris, as a young man with no direction seduced by easy money from the petty crime of the Paris Underworld. He was taken under the wings of an aging Crime Boss of OAS terrorist anti-de Gaulle group (Guido played By Gerard Depardieu in the movie).

In 1961 he married Maria De La Soledad, a Spanish girl from a respectable family and Jacque attempted to go straight, only to be arrested for the first time in 1962 for a failed robbery. After his release, he gains a good job in an interior design studio, but only to be made redundant and once again returned to the life of crime; becoming a robber and a hitman with links to an Italian crime family. His wife attempted suicide and left him, leaving his 3 children with his parents. By late 1960’s Jacques Mesrine was well know to the police authorities in France, Switzerland, Spain, and Italy; but at this point, he was still unknown to the French people.

The legend we now know as Jacques Mesrine was not born in his native France, but in Quebec, Canada; where he fled with his now girlfriend ex-prostitute, Jeanne Schneider. Both were employed by handicapped millionaire Georges Deslauriers who sacked them and in return, they kidnapped him demanding a high ransom; Deslauriers managed to free himself. The couple then fled Canada into the USA, as tourists the “French Bonny and Clyde” went on the run; they were arrested and sent back to Canada. On their

return, Mesrine emerged as a rebel and his persona as a media celeb started and made DeGaulle’s infamous 1967 remark “Viva le Quebec libre!” remarking about The Canadian state’s fight for independence.

After being sentenced to 10 years, he achieved the impossible by breaking out of a Canadian high-security prison with a Quebec fellow inmate. They went on a crime spree, actually breaking into 2 banks within 10 minutes of each other and even doing one bank again several days later!

After being recognised by 2 forest guards, Mesrine murdered them and fled back to France via the USA and Spain. He began a series of raids under many disguises, holding up 2 banks on the same day then doing them again several days later, it became his trademark. In March 1973 he was captured but escaped from the courtroom by taking the judge hostage, the police gave him the Public Enemy No.1 status, coined straight from an FBI book and now Mesrine was a national celeb.

Several months later he was re-arrested by Robert Broussard, the man who would organize his death 6 years later and whilst be awaiting trial he wrote his autobiography “L’instinct de Mort”, claiming his decisions where only rational and philosophical. He also stated that he had killed 39 people but never robbed, killed the poor or even the unarmed.

During his five year spell in Le Sante, he wrote letters and articles attacking Le sante’s conditions. It was also in here that he linked up with the ultra-leftwing Charlie Bauer, who influenced Mesrine to think more as a political activist. 1978 was his greatest coup escaping Le Sante and with a fellow escapee, he made a serious of spectacular raids. In the same year, he gave his famous interview with Paris Match and made lots of threats and accusations, the famous photo of him in white and armed was also taken.

In June 1979 Mesrine tricked a pro right-wing journalist Jacques Tilier who accused him of been dishonorable crook into doing an interview in a cave, where Mesrine stipped him and tried to torture him. Amazingly Tilier survived and is now working in the Reunion as an editor.

In October 1979 Broussard received a tip-off that Mesrine was living with his new girlfriend Sylvia Jeanjacout near to Porte De Clignancourt. Several weeks later in November 15 vehicles and 50 policemen assembled to prevent Mesrine from going on this weekend retreat to Normandy. A vehicle protruded that was Mesrine motor and they opened fire killing him, with Jeanjacourt losing an eye in the shooting. For the last 30 years, Broussard has been adamant that he shouted “Police” to Mesrine but witnesses and Jeanjacourt say otherwise. His death shocked all over France and many left wingers have seen this as a sign of Civil war.

Thousands came out to Jacques Mesrine‘s funeral. Even 30 years on, it’s still a sensitive topic to talk about in French society. But the younger generation has taken the legend of Jacques Mesrine to another level, idolising him like they do for Cantona or any other national hero. They wear the t-shirt of him as a sign of the struggle of the lower classes with the rich. He was their own French Robin Hood. 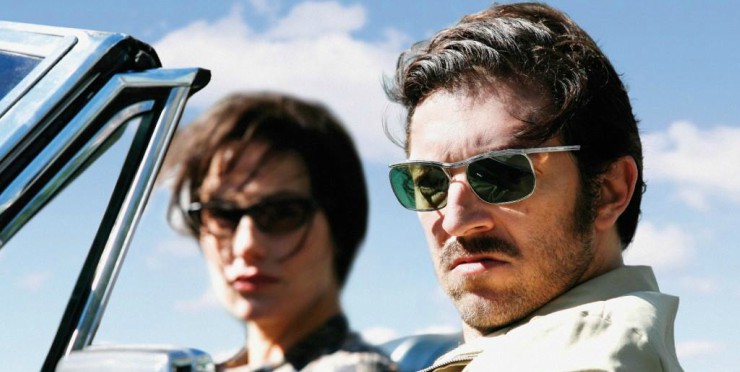 Vincent Cassel is one of France’s leading male actors, born to a strong acting background (his father Jean-Pierre was an actor, his mother sabine was a journalist), on November 23, 1966, under the name of Vincent Crochon. He has a sister, Cecile who is an actress and a brother, Mathias who is a rapper for group Assasin (His Alias is “Rockin Squat”).

Vincent’s wife is an Italian actress Monica Belluci, they have a daughter, Deva who was born in Rome, Italy. Both have appeared in a number of films together with L’Appartement, Dobbermann, Brotherhood of the Wolf and Irreversible.

Vincent Cassel’s big picture movie breakthrough was in the 1995 acclaimed movie La Haine, which won many awards and commendations worldwide. His roles have varied since La Haine from moody movies to brutal, right up to the controversial.

Vincent has appeared in a number of English speaking movies, such as Birthday Girl, Derailed, Shrek (voice of Mon.Hood) and Ocean’s Twelve and Thirteen as the world-renowned cat burglar Francios Toulour. But if you can remember back to the days of 1994 and the Renault Clio adverts of “Nicole!” – “Papa!”, he played Nicole’s Boyfriend!

In an interview with BBC, he talked about how he remembered the day Jacques Mesrine was killed. He remembers his brother telling him that the police have a famous gangster, after hearing gunfire and learning that it was Mesrine after turning on the TV. Television portrayed Mesrine’s death violently and bloody, and the gangster’s death according to Cassel was a message from the government “If you cross the line, this is how you will end up(Mesrine)”

Vincent Cassel also explains that Jacque Mesrine to some was a folk hero, romanticised but to others ruthless and danger to society; this dichotomy was what made Mesrine a fascinating character to portray. Cassel states that in the beginning, he was uncomfortable on how the film was going, with then director Barbet Schroeder, as he 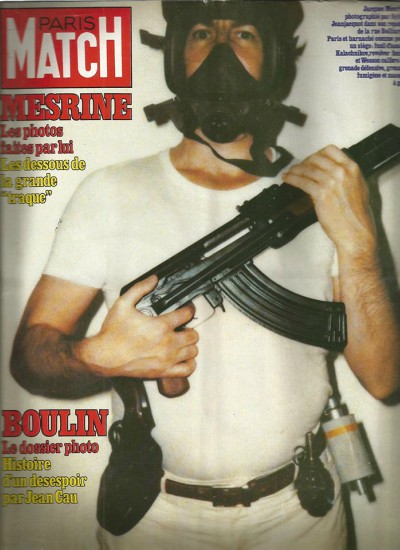 believed Schroeder was very close to Mesrine’s era and was a fan of the gangster; Cassel actually walked away from the part. He wanted the character to be more in depth, the scriptwriter at the time refused. When the new director/writers came in he returned.

Cassel feels that the 2 movies tell a fascinating story, but are also completely different from one another. The first, Death Instinct he called a classic film noir, a story of a man trying to understand himself and what direction he’s heading in; the 2nd movie Public Enemy No.1 was of a man who knows exactly where he’s going but is going for it anyway.

Despite the numerous parts Vincent Cassel has played, Jacques Mesrine will be the part he will now be remembered for and the awards that came his way after the movie will prove that.


SOUND CLIP: Thanks to Guardian Newspaper website, Jason Soloman of Film Weekly has a Podcast with Vincent Cassel the man who plays Jacques Mesrine in the movie, click here to go to the source page of the podcast.
(Podcast source – Guardian Newspaper website)
Apologies for taking so long to do this post, I’m not going to make up excuses why but I think I rushed it a little at the end. This isn’t 100% perfect but hopefully give you a little insight into who the man was, I’ve included the links to the articles I used to make this so please click on them if you want to read full articles.

Mesrine: Death Instinct is out now in selected cinemas and Part 2 Public Enemy Number 1 will be out August 28th [review here]

above post information was the source from and thank you to –

Do or Die issue 9 – “The Indomitable Gaul!” http://www.eco-action.org/dod/no9/prison_mesrine.html