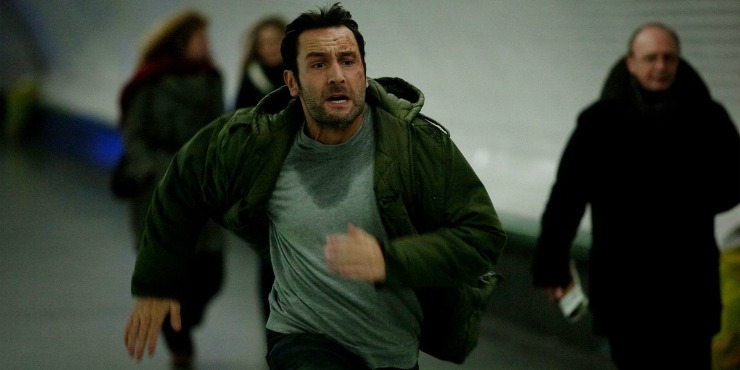 In the days of everything been rebooted or remade you would easily make the mistake and think Fred Cavaye’s POINT BLANK is a remake of John Boorman’s 1967 revenge flick of the same name but its not. POINT BLANK (or A Bout Portant its correct French name) is a sleek fast paced action thriller which never stops until the credits, a pulsating tense affair from start to finish.

POINT BLANK is the follow up movie to Cavaye’s fantastic debut A Pour Elle (Anything For Her) which was recently remade by Paul Haggis (Next Three Days) starring Russell Crowe. In this one Gilles Lellouche (Mesrine, Little White Lies) is our unlikely hero Samuel a unfortunate trainee nurse whose wife Nadia (Elena Anaya, The Skin I Live In) is heavily pregnant and is kidnapped and Samuel is forced to help injured patient Sartet (Roschady Zem, Outside The Law) escape from the hospital he works in.

Samuel must get Sartet if he wants to see his wife alive again but he has one problem Sartet is under police guard. Things just seem to get from bad to worse for Samuel who is now been labelled a fugitive by the police and he now finds himself in the middle of a dirty battle between crime gangs and corrupted police and his only hope of seeing his wife alive again is to team up with the charismatic Sartet.

One thing Cavaye does perfectly in his films is dropping the right (good) person in the wrong place at the wrong time, he delivers this scenario masterfully like he did in Anything for Her with Vincent Lindon. If you were looking for some sort of character development in Point Blank you won’t find any as only basic developments are on offer here, Samuel a turbulent but determined man wife kidnapped who wants to be a good nurse, fantastic father but most of all to still be that proud honourable husband and is certainly not looking  for one of his vows to death do us apart to happen sooner. Cavaye portrays Samuel perfectly and doesn’t take the cheap Hollywood route of trying to make him a Jason Bourne style character making him perform superhuman type defiance, which we only see once in the jumping building to building.

As for Hugo Sartet (his full name), he is a man with very little to say, very cool hand luke type character, a charismatic figure who does seem to bring a sense of balance &order to the affray keeping Samuel at bay, its like a ying and the yang a partnership that seems to work perfectly. As the rest of the support cast, they too work very well with the movie, Gerard Lanvin as the devious cop and Mirelle Perrier the more trustworthy cop both working great like Lellouche & Zem partnership.

POINT BLANK is like that Japanese Bullet train once you get on you dont want to get off until the end of the line, it speeds through at 250mph, superbly acted, masterfully edited backed by a brilliant soundtrack and has amazing chase scenes even Paul Greengrass would have died for if he was making another Bourne flick. Throughout the movie doesn’t present you with any dead end trails and when you think the movie’s protagnists have been cornered like a trapped animal miraculously a space appear with a tense nailbitting  finish in sight.

There was really one down point from the movie which stopped the movie getting full marks was the aftermath of the conclusion, it felt like it wasn’t tied up , maybe pointless. Some people may say the 84 minute running time was another down point as its very short even to todays standards, but POINT BLANK is a fast paced movie that leaves no room for anything else but nailbiting  action, so that is the reason there’s no character development apart from ho the good guys are and who the bad guys are.

My only other concern is how many people who will watch this movie, there’s plenty of people out there who like to call themselves cinephiles connoisseurs of all things films which some are not as many have an arrogant selfish attitude that they wont watch something with subtitles, sadly that minority are missing an exciting world of cinema outthere simply because there too lazy to read subtitles. POINT BLANK is one of the best thrillers you’ll see in a long time, it short but sweet fast paced thriller, which has a fantastic cast, great action, basic but strong story. POINT BLANK is essentially the type of thriller movie The Americans have been trying to recreate for many years and won’t be making for a long time as they only seem only interested to ‘remake’ now.

This movie was reviewed at The Peoples Movies | 10th June 2011