40 years ago in 1979, Ridley Scott directed Alien, a claustrophobic masterpiece that merged sci-fi with the horror which no one could hear you scream. Seven years later James Cameron gave us the near perfect sequel, Aliens (1986). It showed how adaptable the original film idea could be, now blending sci-fi with action thriller.

Both films still stand the winds of time. David Fincher created the third instalment, Alien 3(1992) and Jean-Pierre Jeunnet‘s Alien Resurrection (1997) . Both very divisive films that split fans of the franchise when it comes to quality or even underrated gems. In 2012  Scott returned to the franchise with Prometheus, a prequel to the original offering a glimpse in to the alien predator’s origins.

2017 we got Alien Covenant. Could it deliver the big pay off which Prometheus promised  but failed on? Yes, but only just.

If your hoping the film is going to be groundbreaking you will be very disappointed. Compared to Prometheus, Covenant is a lot more stronger starting point to the franchise. As David said ‘big things have small beginnings’ , we now have that next step in the evolution of the xenomorph and franchise. 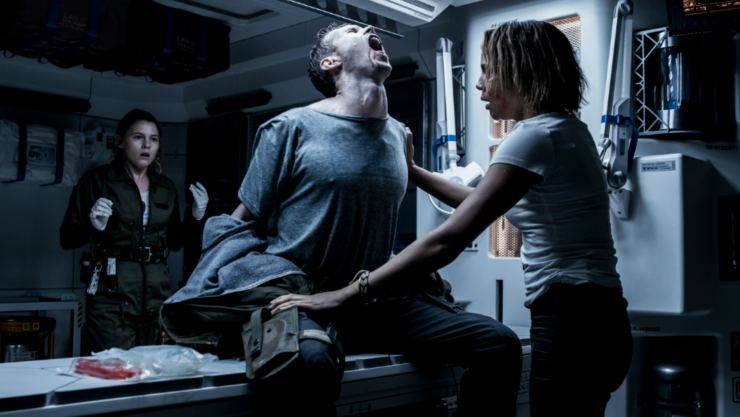 In Covenant, we find ourselves eleven years after the events of Prometheus, onboard the USCSS Covenant. A space vessel sent to colonise a remote planet, with over 2000 colonists, embryos as well as the crew in a deep hypersleep, seven years closer to reaching their destination.

Whilst the crew in their sleep, Walter (Michael Fassbender)monitor’s the crew and maintains the daily running of the ship. When the ship is hit by a devastating shockwave, damaging the ship and forcing the crew out of their hypersleep. The ship’s captain, Jake (an unaccredited role by James Franco) dies trapped in his stasis pod.

When the crew start to repair the ship, they pick up an transmission which contains a human voice. The crew decide to trace the transmission which take them to a more habitable planet than Origae 6 the colonists intended destination. After much debate and protest the crew decide to go an explore the planet. On the planet they are rescued by an unexpected face, David (Michael Fassbender) the synthetic from the Prometheus ship.

Its then the new uncharted paradise, slowly becomes a dark, dangerous when they fight for their lives largely thanks to a newly discovered hostile alien race.

The original Alien film is visually stunning capturing the claustrophobia, the deafening silence of the empty abyss of space. The film set the standard not just for the rest of the franchise films but any other film set in space. Alien Covenant is no different, its actually a beautifully striking film to watch.

Darius Wolski‘s cinematography immerses you into the colonists world even making things personal. On the planet you feel the vastness of the planetary landscapes, the Greco-Roman building David shelters in alongside the film’s colour palette. Throw in Jed Kurzel’s score/sound design we get something that’s reminiscent to iconic sounds of the early films. Reminding us something nasty is lurking around the corner .

It was a wise move to reintroduce elements of the familiar franchise tropes: Chestbusters, Xenomorphs, facehuggers. Mixing them up with newer ones like  Backbusters, Neomorphs which keeps thing interesting when it comes to franchise developments.

As for the acting, its really solid with several actors shinning through. Danny McBride as our fun loving cowboy heart wearing Tennessee, Katherine Waterston does her best to be our Ripley-esque  character Daniels. Our hats come off for Michael Fassbender as our synthetic characters. Playing someone who seductive, curious most of all nefarious.