Amongst the cavalcade of cinematic masterpieces, arthouse wonders, World Cinema powerhouses, The Criterion Collection know how to dial down the tone, to unleash some lighthearted fun. Gregory La Cava‘s My Man Godfrey (1936), a brilliantly funny screwball comedy that delivers that lighthearted fun with some social satire.

When it comes to period based films or Television shows with Elite/ Upper-class characters, it always a more drama based ‘How the other half lives’. The Depression-era in the USA was no laughing nor was any other similar period in our history worldwide. This film was not a film to make a mockery of the poor if anything it’s more the rich or their insensitive to life around them.

My Man Godfrey we meet our upper-class family in question, The Bullocks in the middle of a society ball scavenger hunt. Socialite sisters Irene (Carole Lombard) and Cornelia (Gail Patrick) find themselves in the (New York) City’s dump looking for the ‘Lost Man’. The sisters find that man in the shape of Godfrey (William Powell) living in Skidrow. Cornelia tries to lure him first, only to find herself pushed into the dump. Disgusted by the insensitivity of the women, Godfrey decides to play along with the game all thanks to Irene’s apology, helping her win the hunt.

Overwhelmed by the kind-heartedness, Irene offers Godfrey a jobs as the family’s butler. He accepts the offer at the spite of Irene’s family with her sister determined to make life hell for him. As time goes by, the Bullocks start to see how good their new butler truly is and start to like him. Irene is head over heels in love with him and attempts to indoctrinate him into her family’s crazy, dysfunctional ways. At first, he keeps her at arm’s length but finally gives in as there’s more to the newly butler meets the eye!

Living in a household where my parents grew up with films like My Man Godfrey, I’m shocked it took me so long to embrace the era. When it comes to comedy, it takes a lot to get me laughing, this got me giggling. Nowadays in Film and Television, we rarely see the Upper class in a humorous way. Thanks to the likes of Downton Abbey, usually we see them in a drama setting, not in a flawed way. Certainly not in a comedy that depicts social class in conflict during America’s great depression.

Gregory La Cava has created a deftly executed film that’s full of wit and frivolous in nature. We seem to watch the Upper Class/Elite with a jealous eye, living a ‘life of Riley’. Sniggering at how trivial real life is and anyone below them in class.

La Cava’s winning formula was to work very closely with his cast at every stage of the film’s production. essentially giving them a free pass to improvise (he worked years with W.C Fields and the films writers worked with The Marx Brothers) to a certain degree. At times things might have felt over the top, but it was intentional. We all like to squabble and fret and this made The Bullocks authentic most of all human.

William Powell and Carole Lombard as our lead two gave unparalleled, indelible performances. Its hard to believe they were a married couple once and by the time the film was released they had been divorced for nearly 3 years. If there was any aversion between the two, it didn’t show on film. They equally played off each other perfectly and rapid.

Gregory La Cava was a filmmaker I knew nothing about until I watched and researched My Man Godfrey. Originally he was a comic strip artist who slowly became a director in the silent film. When sound arrived in film, like many directors from the silent era he struggled.

My Man Godfrey was one of La Cava’s last big success. Created a film that will sit proudly amongst other Screwball comedies such as It Happened One Night (1934) and Bringing Up The Baby (1938). An incredibly funny social critique that comments on the era with great caution, the sensitivity with a little slice of satire.

As ever The Criterion Collection never down when it comes to picture quality. Presented as a 4K Digital restoration in an aspect ratio of 1.33:1, encoded with MPEG-4 AVC 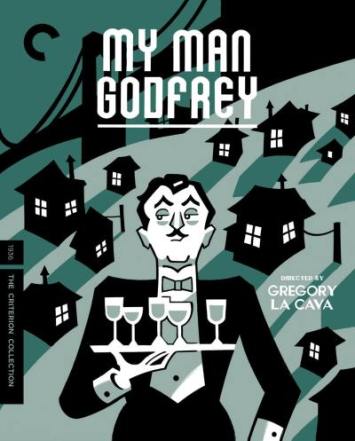 with a 1080 transfer. When it comes to the attributes everything looks too pushed to the max bitrate with duality rendering absolutely near perfect, gorgeous to watch. There is a little white fuzziness at times that makes things a little gritty, dark at times, but not enough reduce your enjoyment.

There is only one standard audio track, English LPCM 1.0 with an optional SDH English subtitles available too. The audio itself is a linear Mono Transfer (24 bit), it’s stable, clean coming with really good clarity. The crackles, hiss, hums and all those little imperfections have been removed.

Star of the show again (and one of the selling points for paying that little extra), the extras. The La Cava Touch (18mins, 2018) Film critic Gary Giddins does a brilliant job putting My Man Godfrey into perspective. Helping us understand Gregory La Cava‘s process and why he’s just an important director as much Franz Kapra when it comes to similar films. Effortless Art (19 mins, 2018) critic Gary Pinkerton equally delivers an interview that’s superb insight into the director and his own journey from a comic strip artist, filmmaker to his demise. It may be a little repetitive with the previous extra but if you’re like me knew nothing, great source. Many films of the era were also adapted for radio, and you have a Lux Radio Theatre adaptation of My Man Godfrey from May 1938. Powell, Lombard, Patrick, and Mischa Auer all reprise their roles.

If you really want to see how depressing the era was, check out the Newsreels that reflect the era of the film especially the poverty and homelessness. There is also the bog-standard, trailer, outtakes alongside a written essay from Farran Smith Nehme.