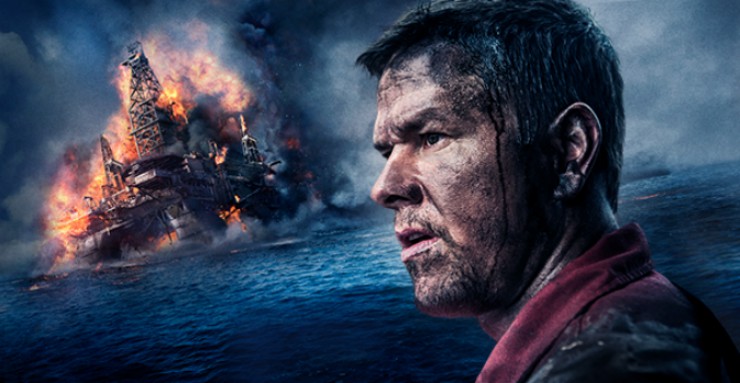 Hollywood and multi-billion dollar corporations are like 2 peas in a pod, they will never step on each other’s toes and in movies more likely to be filled to the brim with product placements.In today’s Tinseltown, it takes a lot of balls to smear a company’s reputation and Peter Berg’s Deepwater Horizon, it was something that had to be done. A movie that harks back to the U.S worst natural disaster, when in 2010 BP (British Petroleum) attempted to hide behind the name of profit in the face of disaster.

Peter Berg as a director may not exactly be a positive a positive start for some. Especially when his track record includes the likes of Hancock and Battleship. He has been called a ‘Michael Bay‘ Clone by some critics and with Berg’s track record you would be right to be concerned, that Deepwater Horizon could end up another overly patriotic mess. What we do get instead is an efficiently mature movie that will grip you and a director that’s ready to shred his adolescent year up.

We head back to 20th April 2010 when one of the world’s largest man-made disasters occurred, The Deepwater Horizon oil rig set in the Gulf of Mexico went up in flames. The men and women who worked on this rig were no superheroes, ordinary blue-collar workers. When disaster strikes like it did 7 years ago, they find themselves out of their comfort zone, bravery and will to survive banding them together. They use them to attempt to escape before the flames overwhelm them.

You don’t have to wear spandex nor be bitten by a radiated spider to be superhuman.The movie focuses on a few of the characters especially Mark Wahlberg‘s Mike Williams, an everyman who has a loving wife (Kate Hudson). They have a daughter, proud of Daddy’s job, so proud before he heads off she showcases her experiment with a coke can. The can explodes, becoming a metaphor for what lies ahead for her dad. The team Mike’s part off is a well oiled (pardon the pun), experienced, they know the rig inside out and know what to do when things go wrong. All thanks to Jimmy Harrell (Kurt Russell), their veteran gaffer who has to walk on eggshells to balance the diplomacy when the BP Suits are around. So who was to blame for the disaster?

Deepwater Horizon doesn’t hide the fact BP is the ones to blame, with all fingers pointing at Vidrine (John Malkovich). The one time they should have given the ghost upon the profits for the safety of the workers. Thanks, to Vidrine’s cynicism and greed, saw all profit go up and flames, sadly the lives of, many workers too. This turned the disaster movie into a survival movie.

The first hour of the movie is slowly paced, but not in a meaningless way as we learn about the men and women who worked on the rig. Given us a taster of life on the rig and how things worked before things get extremely hot, visceral and chaotic.

Deepwater Horizon is an efficient, engaging movie backed by some strong performances from Wahlberg and Russell. A movie that does celebrate the courage and bravery of heroes, the working man and woman. A stark reminder when money interferes with the running of a well oiled machine, disaster will always strike.

DVD Extras: 2 Featurettes – Captain Of The Rig: Peter Berg -cast and crew talk about working with the director and his vision. The Fury Of The Rig: All about the special FX of the movie. Deepwater Surveillance goes behind the scenes showcasing how they achieved certain scenes – Overall nearly 1 hour of extras, ★★★