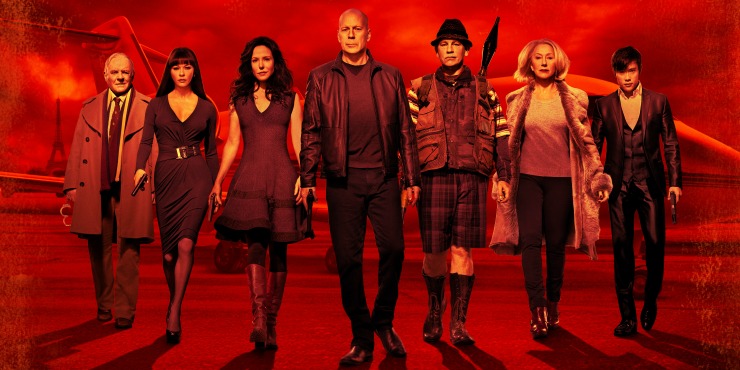 Everyone likes a film that surprises you in expectations, In 2010 RED was one of those films becoming a unexpected hit. Now 3 years later RED 2 has arrived and the question we ask will cinema’s most dangerous but retired C.I.A agents deliver the goods once more?

RED 2 is set several years after the first film we meet Frank Moses (Bruce Willis) attempting to live a ‘civilian’  with Sarah (Mary Louise Parker) but things aren’t working for them and their relationship is becoming stale. When things don’t go right for Frank trouble isn’t far behind and he finds out Marvin (John Malkovich) was a target of a car bomb only to unravel the information that Frank himself is a target once again, The CIA & MI6 want him dead and let loose assassins, Han (Byung Hun-Lee) and Victoria (Helen Mirren) however with most of the old team reunited once again they finally discover the real reasons due to an old operation called Nightshade. With the past coming back to haunt them the team they must find eccentric British Nuclear expert Bailey (Anthony Hopkins) even if it means Frank crossing paths with an old flame he rather not meet.

If you’re a fan of the first film RED 2 probably won’t disappoint, the humour, the explosions, the outrageous plots are all there but what the follow up film lacks is emotion. The characters are all fine in their own individual ways Willis delivers his usual Yippe Kai Yeh action hero, Malkovich’s Marvin does his best as the LSD fried brained at times creepy nutjob spitting out some of the best lines however he’s not the films scene stealer. The privilege goes to Helen Mirren as Victoria who looks like shes having a ball putting on the camouflage picking up a riffle, she even has to reprise her award winning Queen role to get herself out of a sticky situation.  Romantically there’s nonthing  even with the introduction of Catherine Zeta Jones as Frank’s old flame Katja who really only gives fuel for Sarah to deliver some nice one liners. This family sadly highlights Zeta-Jones is has been crazy to think she was once seen as a future A-list female actress now shes nothing more than the troubled wife of Michael Douglas or in this case, the weak spot of RED 2.

Putting the positives of the cast to one side, some of the cast suffer from undeveloped script. Visually the films style is held back a bit but kept intrigued when Han is on screen especially in one scene where he kicks ass with some Russian cops in a Moscow food store. RED 2 does feel toned down sadly a little more generic  with a frantic pace stops any of the plot developing beyond what we see on the screen. Hardcore fans will enjoy this as it’s much of the same however if your new to the franchise don’t blink or you’ll fall off and miss something.