about 20 plus years ago I remember one lazy summer day, schools out for summer as usual nothing to do but I decided have a day watching tv. That morning I was awe struck at the beautifully drawn animated film that was appearing in front of me, a animation I was later to learn was called Laputa Castle In The Sky. This was day I fell in love with Japanese animation and of course Studio Ghibli, the animation studio that has went on to inspire the so called biggest animation studio in the world Disney. I’m ashamed to call myself a anime fan when I haven’t seen all the studio finest films 20 years on though I have my reasons which I wont bore you with.

As the studio’s latest creation Arrietty is also about to entertain children of all ages in home entertainment worldwide thanks to the power of Double Play Studio Canal are giving us a chance to relive a gem of a film from 1995, a simple tale of young love and a girl trying to learn and believe in herself.From the magical pen of legendary Hayao Miyazaki , directed by Yoshifuni Kondo the director who was regarded as the protege of Miyazaki we have the wonderful Whisper of The Heart (Mimi wo sumaseba). 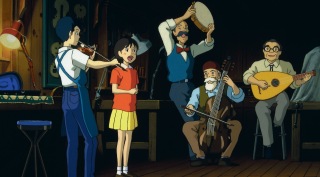 Suzuku Tsukishima a young girl about to finish her final year at junior high school.She is a book worm (who has a father who happens a librarian!) who has dreams of becoming a great writer one day, she meets a boy Seiji who charms her but also at the same time annoys her but ironically Seji has been getting the same books out from the library as Suzuki. On a trip via train to deliver her father’s packed lunch she stumbles across a very strange sight of a fat cat travelling on the train with her and like any aspiring writer she lets her imagination, curiosity run away with her and decides to follow the cat. The journey would lead Suzuki to a small suburban area to a small antique shop which inside had a small  strange statue of a cat which Suzuku  curious about which she would learn from the elderly owner who also just happens to be Seiji’s grandfather. Through time  Suzuki & Seiji would become friends, inspired by Seiji’s determination to become a master violin maker, she would eventually take the giant steps forward to become that great writer and realise the boy she first hated may now be the one she loves.

I love using the phrase “it’s good to be different” and Whisper Of The Heart is different when we refer to Studio Ghibli films. This film doesn’t have great battles, mythical creatures, flying pigs or even flying castles but is a tale of coming of age. Whisper of The Heart is a slice of life which finds its charm in how realistic the story is with no magic just people making it a memorable,poignant  heartfelt tale which will be enjoyed by all. 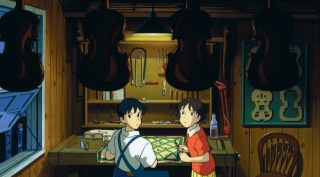 Whisper of The Heart is a gateway into a young girl’s life as she attempts to find herself thus taking the first steps into becoming a woman. The moral of this film is to listen to that little voice in your heart, follow your dreams, aspirations , there maybe ups and downs but stay true there will be more ups. In the film we get to see Suzuku  show off the artistic talents she has from story writing to her attempt to translate John Denver’s ‘Country Road’ song which actually captivates the films emotions which I’m sure probably bring a few smiles as well as tears as its a heartfelt song like Jennifer Rush’s Power Of Love  which also seems to have the same effect.

If your seeking the magic, fantasy elements we usually expect in Studio Ghibli Film’s you may find some solace in the film’s character’s who all have a magical story to tell,they are emotive in detail as well exploring their feelings. Even the scene with the fat cat  shows off a magical element of Suzuku’s imagination getting inspired by the little adventure which we see later in the film in the dream sequence as she tells the story of the Baron the cat statue  she adores, this part itself is probably the fantasy element you expect to find in a Ghibli film. Whisper Of The Heart  ends not been the only time we will meet the baron as he returns in the 2002 Cat Returns.

It’s tragic how Yoshifuni Kondo‘s life was tragically cut short as his only directorial effort worked harmoniously with Miyazaki’s simply but magical script and you could say Whisper Of The Heart was the director’s application to be that potential successor  to the Studio Ghibli Crown. Kondo’s attention to detail is nothing but superb capturing the cityscapes, changing of weather, colours, tones like elegantly threading the eye of the needle with precision. This film captures the heart of the tale of first love like it was so personal, with such caring   warm tender touch that would bring a smile to any adult  who remembers their time. Whisper of The Heart is often described as the forgotten gem but thanks to Studio Canal it will now be the gem we will not forget 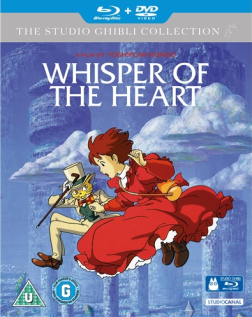