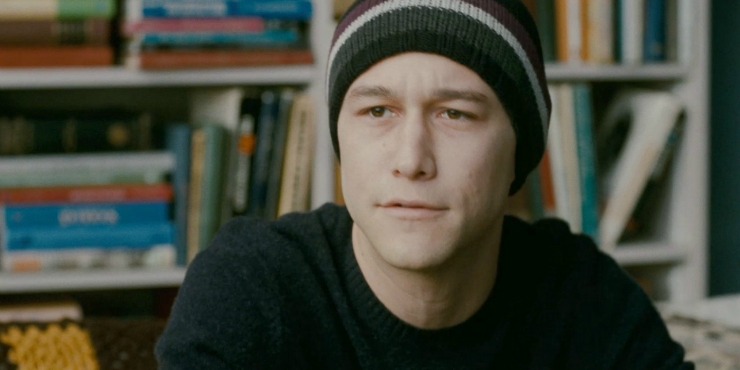 Mixing comedy with a life changing experience such as a near fatal disease might not be everyone’s cup of tea and could be seen anything but funny. How you approach the subject matter is the key and in Jonathan Levine’s 50/50 the subject matter maybe be cancer but it’s not the disease that’s the funny subject its how people cope and respond to the disease.

50/50 stars Joseph Gordon-Levitt as Adam a 27 year old writer for a local Seattle radio station who goes to the doctors after complaining about back pain. What starts as a routine check up turn’s into a nightmare for Adam as he is diagnosed with a rare life-threatening spinal cancer giving Adam a 50/50 chance of surviving. Now in a dire need of support from his loved ones he first gets it from his girlfriend Rachael (Bryce Dallas Howard) but eventually her guilt and self-obsession get the best of her and she scatters, then we have Adam’s mother (Anjelica Houston) who just do what mums do best worry  as in her eyes your still that little bundle of joy she gave birth to 27 years previously so even when things are ok she’ll still worry.

As Adam’s world starts to collapse around him the true support he needs shines through first in the shape of Katherine(Anna Kendrick) the young therapist assigned to him for counselling.Despite her inexperience to cope and provide proper counsel to Adam’s psychological pain, she does lend the listening ear to let Adam dish out his angst. They always say you know who your true friends are in time of crisis and Kyle (Seth Rogen), Adam’s best friend is certainly that friend for life he needs.

When you have a film all about the effects of the big C (cancer), isn’t a laughing matter but in 50/50 is a comedy that doesn’t ridicule the illness that’s affected people from all walks of life all around the world. 50/50 is a genuinely moving funny tale that will make you chuckle and even cry at the same time simply down to the film based on its writer Will Reiser’s own personal battle with cancer. As they say, sometimes you can’t understand or appreciate it until you have either tried or experienced it personally and because of Reiser’s own experience, he brings an honest account that’s raw and most of all heartfelt.

What works for 50/50 is the chemistry between Adam and Kyle, Joseph Gordon-Levitt, Seth Rogen. Levitt deliver’s a genuine performance that never makes Adam feel like a moaning minny or clichéd. This film is further proof of why he is one of Hollywood’s hottest young actors delivering a subtly and versatility to what on the card looks a difficult film. Seth Rogen has he delivered a career best performance? Possibly, but what he does prove he can leave his comfort zone of comedy and deliver a dramatic performance which can be as good or even funnier in what he’s done before. Rogen gives Kyle a charming love-ability to do what friends should do friends should do in the time of crises, cheer up their buddies, he even encourages Adam to use his cancer to pick up sympathetic girls. Ironically the reason why Rogen’s performance stands out is simply down to Kyle is actually Seth as he his Will’s true life friend!

Have to give a mention to Phillip Baker Hall, Matt Frewer  who play the older cancer patients Adam meets when he starts the chemotherapy. They introduce Adam to the ‘medicinal’ marijuana delivering a extra piece of humour to the film but most of all they help Adam appreciate life and encourage him to grab the bull by the horns and laugh at the face of death, letting death know “life is short but it’s too soon for me to die now!”

50/50 is a moving poignant tale that will have you laughing and crying at the same time. Despite the rocky opening the film rarely clichés or even questions why or how we get Cancer its just how we cope with the devastating news and what we do to fight it.

This was originally posted at The Peoples Movies | 25th November 2011