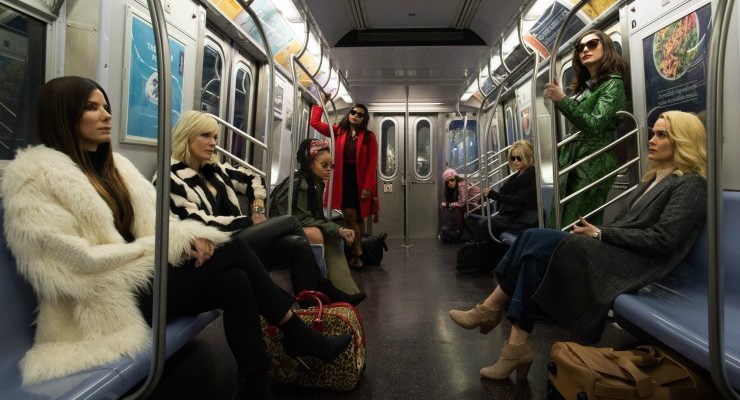 Danny Ocean’s legacy continues when his little sister Debbie picks up the reigns in Ocean’s 8. Sandra Bullock plays Debbie and like her big brother, she did time for her last crime. But once you get a taste for thievery it never leaves it’s in the blood. The burning question is this latest Ocean’s 11 spin-off any good? The answer is…It’s ok but disappointing.

Five years, eight months, 12 days and counting, that’s how long Debbie Ocean spent behind bars. Now released from prison, those so-called years on past misdemeanours, been stitched up by her former boyfriend (Richard Armitage) are over. Debbie wasn’t just reflecting she was using her ‘spare time’ doing what she does best, concocting the greatest heist of her storied career.

Her target is $150 million in diamonds, in the form of a luxurious necklace that will adorn the neck of world famous actress Daphne Kluger (Anne Hathaway). She will be the centre stage at one of the events of the year. To pull this one off, Debbie must recruit the best in the field, a crew of specialists: Jeweller Amita (Mindy Kaling), Street con-artist Constance (Awkwafina), expert fence Tammy (Sarah Paulson). Hacker expert nine-ball (Rhianna) and fashion designer Rose Weil (Helena Boham Carter).

Their plans look rock solid. Can Debbie’s crew pull off the job? If the girls are going to pull this one off, it will have to be flawless.

There’s no way of saying, Ocean’s 8 is Ocean’s 11 Lite with an all-female cast. Calling it ‘Lite’ is no fault of the cast, they delivered the best they could. They did deserve a better script, as the one they got left some of them underused.

One could argue we have been misled on expectations especially if you were expecting an entertaining spin-off that could shine proudly on its own. What we do get instead is a predictable near clone of the original film. Minus the slickness, style but at a slower pace. Even Debbie herself is suave, charming like her big brother.

Even with the side story with forgettable Debbie’s ex-boyfriend, the cast save this film from being a total disaster. However, when it came to the actual heist, it lacked any challenges or obstacles to getting the prize. Off course any criminal wants the prize trouble-free, but this was like leaving the bank vault door opened with an open invitation to come and get it.

Despite the flaws and lack of charisma, Ocean’s 8 is mildly entertaining to a certain degree. It will be enjoyed by hardcore franchise fans, more than new fans. Maybe one of the many talented female directors out there with Steven Soderbergh directing may have delivered a more engaging film from a female perspective. This may be a film in a male-dominated genre, it doesn’t mean a female director couldn’t deliver a great film, just look at Wonder Woman! A missed opportunity.

A Heist in Heels