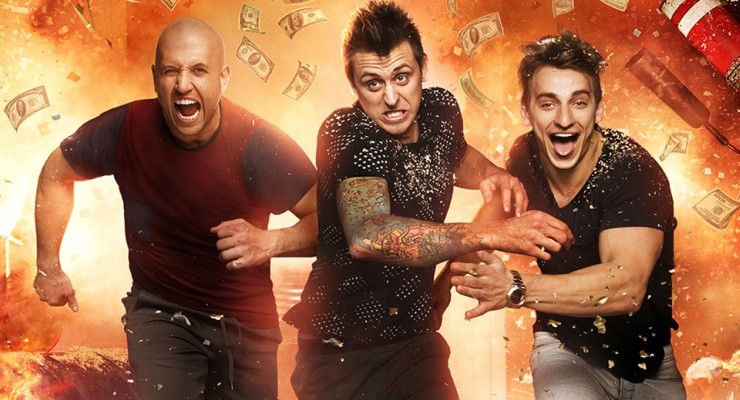 Natural Born Pranksters unexpectedly arrived through the post at weekend and with having no TV &nbsp, or Internet connection reluctantly I decided to watch. After watching  2 minutes I can clearly see why this arrived with no fanfare as it’s horrendous.

Allegedly Natural Born Pranksters  are Youtube sensations, a group of ‘pranksters’  that consist of Roman Atwood, Dennis Roady, and Vitaly Zdorovetskiy. Collectively the trio boasts 28 million subscribers and now they are bringing their own brand of fearlessness and unbelievable social experiments to the next level. Featuring all-new never before seen pranks, badass stunts.

Vitaly’s own channel (VitalyzdTV) has been voted #1 prankster channel has 9 million subscribers, Roman Atwood Vlogs boasts 100 million monthly views generating pranks with over 13 billion views worldwide. These boys are certainly leading the way in viral pranks, but can they take that brand of mayhem to the next level? After a very limited cinema release in the UK (ironically April’s Fools Day, 1st April!), Natural Born Pranksters is coming home again not your computer screen but your DVD player.

My weekend with no television or even internet I believed reviewing a film for a show  I had no clue about would ease that pain, how wrong I was. For nearly 20 years Johnny, Knoxville with Jackass spurned endless copycat shows trying to outdo each other but only leaving you with the ‘same old same old feeling’. It has been getting a little boring with so many similar shows flooding the market, it makes you wonder if these guys are truly those figures and subscribers. If true there must still be a market for prankster shows.

Some of you may say these guys are completely different league from the likes of Jackass, you may be right. However the philosophy is the same but the pranks and stunts are more grounded, just as silly and ridiculous most of all stupid. Are People still callous falling for these same pranks over and over again? Whatever you think Jackass will always be used as a reference to judge this film. So if you think making art from human poo (it was Nutella) convince people its a ‘masterpiece’ or have ATM’s spout out “free money” Even watch a human cannonball half shred to pieces from explosion crawl to his target remotely funny, this will go down a treat with you. You will go through the 90 minutes thinking “surely not everyone appreciated these pranks?” and yes they do show some of the pranks going wrong or the public not seeing the ‘funny side’. From a stunt at Brazilian World Cup to a fake bomb prank which saw one of the team in jail with an extremely large bail stuck to his head.

Natural Born Pranksters is criminally unoriginal, that many others have been doing for decades. If you really want a true prankster who was love and well as loathed, google the late Jeremy Beadle. From Game For  A Laugh and Beadles About he was doing these pranks  back in 1980’s, a true master sadly missed. If they’re not on some social media platform or watched through Mobiles or IPads the young generation are not interested.

Kiss Sung “God Made Rock ‘N’ Roll” back in the 1990’s, thank God someone has created the remote control so I can fast forward to the best part of this film the end. Just a shame we can’t rewind  ourselves back and steal back those hours this atrocious film stole, I think if we did I’d be about 20 years younger.