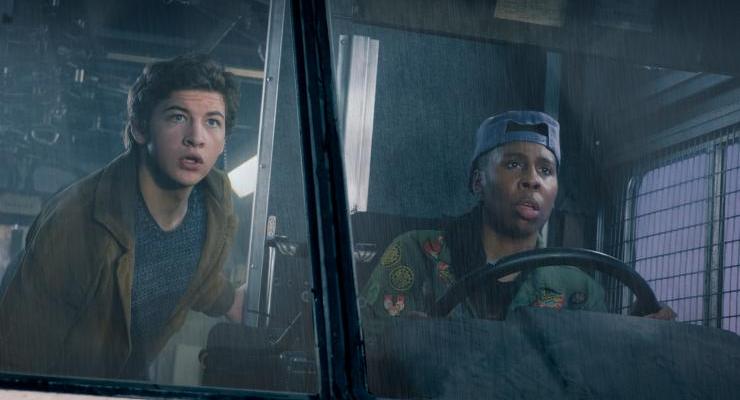 Recently a younger relation called me ‘old’, asking what my generation ever give to film and pop culture. Two words Steven Spielberg, a master storyteller who helped shape the blockbuster film. This week we see the home entertainment release of Ready Player One, a nostalgic ride into the Eighties and Nineties pop culture.

Spielberg influence/inspiration needs no introduction nor does he have to explain his reasons. He shaped the decades pop culture, those decades I was a child/teen. Ask anyone of my same age group to name a favourite film or TV Show, you can your bottom dollar Spielberg was involved in some shape or form. So is the younger generation ready for Spielberg to unleash his magic?

Based on Ernst Cline‘s 2011 novel of the same, we find ourselves in Columbus, Ohio USA in the year 2045. The world is over-populated, resources are slim and people are living in shanty-like towns (camper vans piled on top of each other). Life is tough, monotonous, and they have only one true escapism, The Oasis. This is an immersive virtual universe where the population spends most of their days in. There they can be anyone they want, go anywhere, do anything, with only their only limits been, their imagination.

Wade Watts (Tye Sheridan)truly feels alive in The Oasis, a world created by the brilliant and eccentric James Halliday (Mark Rylance). When Halliday suddenly dies, a pre-recorded message from the man announces the launch of a competition to find his successor, The winner will take full control of his fortune and The Oasis. The challenges have been set up and designed to find his true heir, a challenge (or Parzival as he’s known in the world) excitingly accepts.

Sorrento sees winning the treasure hunt his way not just to make more money, but to become the only company and kill off all opposition. Sorrento employs an endless number of players to make sure he wins those elusive keys. Wade now must form an alliance with Art3mis (Olivia Cooke) joining his online friends Aech (Lena Waithe), Daito (Win Morisaki) and Shoto (Philip Zhao) to save not just The Oasis but the real world too.

Ready Player One is a pop culturist/easter egg enthusiasts wet dream. You’ll be like a kid on Christmas day with so many Gaming, Television, film icons on show. Everyone from the likes of Street Fighter, King Kong, T-Rex from Jurassic Park, Robocop, Iron Giant, Freddy Krueger, ET, Kaneda’s bike from Akira. Parzival even drives the DeLorean from Back To The Future! The list is endless and many of you will have fun trying to pinpoint them all. Some might see it as overkill but this is a virtual world you are in control.

Creating a world with so many pop references is no easy feat. There’s only a handful of filmmakers who can create something of this size and make it totally mesmerising out of something that looks impossible to recreate. Spielberg is one of those directors who can capture those references with such ease to create a thrilling watch. No matter how generic this sounds, Ready Player One is an outstanding popcorn cinema of the highest order, pure entertainment.

This film is about a person’s need to escape the stress and worries of reality. This is what film is all about, it’s also why Halliday created The Oasis. Sorrento is the evil capitalist who may pretend this is also his reason. He does want to manipulate you, control you in such a way he’ll control your every whim. He may even ‘in prison’ you too.

Some have argued over the changes Spielberg had to do to the source material. Many may not like the changes but to adapt sometimes these changes must be done. Over the years many other Book to film adaptations went through this process with JR Tolkien‘s Lord Of The Rings Trilogy the perfect example. The one big change that’s upset some are keeping alive a certain character, their death in the book was a pivotal moment to the story. As for the overall changes they have gone really well.

The final third of the film does lose its way a little and those not familiar with the pop references get lost in the narrative, the humour. Ready Player One is Ernst Cline’s very own Charlie And The Chocolate Factory, an inspiration the author himself has publically admitted too.

Ready Player One has much more going for it than against it. It’s pure entertainment at its best from a master creator, a David V. Goliath adventure. It may not be Spielberg’s greatest work but what he has done is created a visually fantastic film with an equally fantastic soundtrack. There’s only going to be one place you’ll see a DeLorean, Batmobile, A-Team van, mad max, The fury from Christine in one big drag race….that’s Ready Player One! Strap in and enjoy the ride! 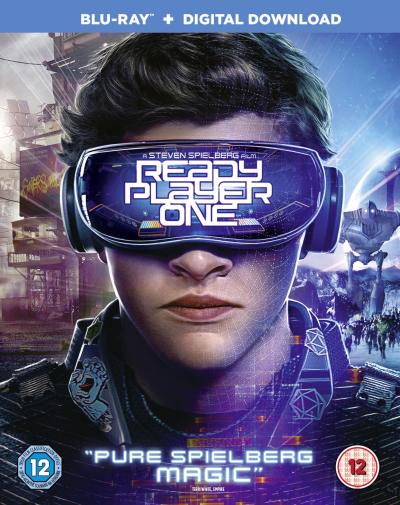 This film was reviewed using the standard Blu-ray release with the film also available on 4K UHD, 3D Blu-ray and DVD. The film was shot digitally as well as 35mm using a various number cameras (Arri Alexa Plus, Panavision Primo cameras). The blu-ray presentation is powerful, solidly presented in a near-perfect 1080p transfer (2K DI)with Dolby Atmos surround mix. Like anything, it’s all down to what technology you watch the films on, will shape the quality. All the sounds, clicks, bangs, ambient sounds will keep you happy.

When it comes to the mainstream films we don’t usually go into the extras as many are very disappointing. For this one including the Audio & sound Warner Bros have created a fantastic package worthwhile talking about. Nearly 2 hours of extras varying from 5 minutes long to the star of the show.. ‘Game Changer: Cracking The Code'(60mins) the making of the film covers all the expectations for a behind the scenes documentary. There are also 5 other extras that dive into the film including the cast and crew talking about the 1980’s and love for the decade. The package also comes with a Digital download of the film.