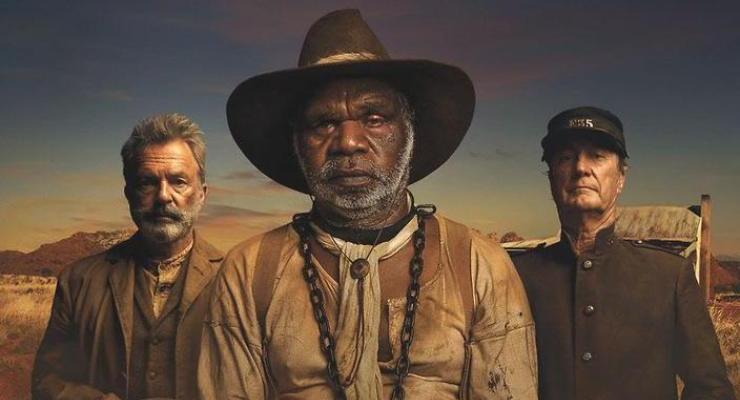 Nine years after his impressive directorial feature debut Samson & Delilah, Warwick Thornton is behind the camera once again with Sweet Country. There is no ‘sweet country’ to be found in this one, an examination of the oppression and harsh realities of the indigenous people of Austrailia the Aboriginees. A dark slice of Australian history many people rather forget, but thanks to this film you won’t.

When it comes to racism in a film (and television), we really only seem to concentrate on the atrocities of the African slave trade. The Aborigines population suffered just as much and this film is partly inspired by one true story from the film’s main writer David Tanter‘s grandfather.

Sweet Country takes us back to 1929 the outback of the Northern Territories, Australia. Preacher Fred Smith (Sam Neill), dedicated to his faith treating his fellow man and woman with respect including the Aboriginal man Sam (Hamilton Morris) who works for him. The neighbouring outpost was taken up by Harry March (Ewan Leslie), a bitter veteran of World War One who approaches Fred for help in the renovation of his cattle rounds. He agrees and sends Sam to help him.

It doesn’t take long for Sam to realise Harry’s attitude towards him was a lot different from Fred’s. Cruel, resentful, treats Sam as subhuman, referring to him as ‘Blackstock’, he won’t even let him or his family stay close to his home. Harry feels a sense of entitlement to do what he pleases, forcing Sam to send his young niece away. With Sam’s back turned his wife Lizzie (Natassia Gorey Furber)is cornered and raped. This pushes Sam over the edge culminating in a violent conflict which sees him shoot Harry in self-defence.

This result forces Sam to flee with Lizzie, with him now a wanted ‘criminal’ for the murder of a white man. Escaping across the burnt terrain of the wilderness, tracked by Fletcher (Bryan Brown) and his posse As the posse get closer to Sam, slowly details emerge about the killing which people start to question justice is been really served.

Sweet Country is a brutal assault on your conscience, as you witness the mistreatment of the Aboriginal characters. Examining the racism they face, to the physical abuse. When researching on the film, every year on ‘Australian Day’ a Pandora’s box is opened with the left and the right of the country’s politics trade blows. Whatever way you present the argument the abuse happened and no matter how much some want to hide it, it’s deep-rooted in the country’s colonial past.

Warwick Thornton has created his very own Greek Tragedy. Sam’s journey fleeing the posse you could argue is his self-reflection, him walking his own ‘Green Mile’. He can’t run forever and we see in the film he unexpectedly walks right into the town of his accusers, being judged by what easily could be called a ‘Kangaroo Court’.

Thornton is a man of many talents. Next to his directing, writing, producing he’s also a fantastic cinematographer. He superbly captures the harshness and beauty of the scorching Outback. An unforgiving land to those who don’t respect it. In one scene we see Sam rescue a stranded Fletcher, would a guilty person show compassion towards someone who wants to kill him?

The slow pacing of the film really helps the film as does having no score. The only sound is the natural sounds of the land which creates a feeling of isolation, tension delivering more depth to the atmosphere. Ironically the end credits do have one song from Johnny Cash, ‘Peace In The Valley‘ which fits nicely into the film’s overall tone.

Mixing the film’s cast with professional actors and non-professional actors (mostly the Aboriginal cast) works perfectly. This gives the film a raw organic sense of realism. Kudos to Hamilton Morris who delivers a taut performance.

Sweet Country is a powerful Australian Neo-Western (best since John Hillcoat’s The Proposition), that doesn’t hold back. A gripping film that opens your eyes to the dark side of Australian history. Brutally honest and it will pierce the heart with emotion.