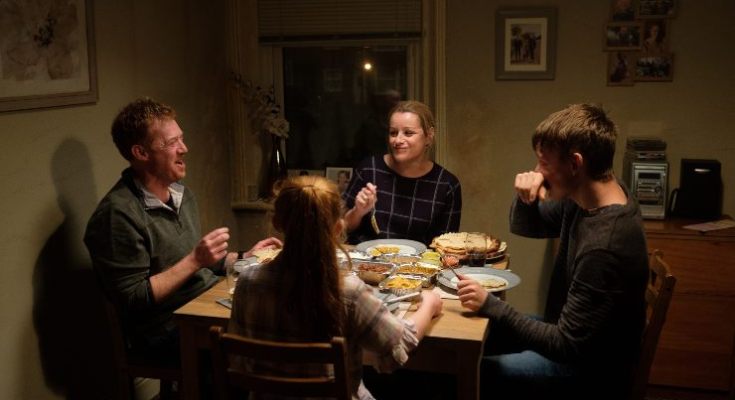 Here in the UK, we seem to live in a society that rewards the wealthy getting richer. They also reward for ‘punishing’ those just simply trying to exist. It doesn’t help much that the nation’s press are predominantly right wing. Who take great pleasures at demonising the unemployed, the lowly paid, to them they are the ‘problem’, they’re not. In Sorry We Missed You, we follow the Turner Family who are no scroungers or even lazy. Just one of many ordinary families struggling to survive in an austerity loving Conservative government.

The 83 year old filmmaker Ken Loach, doesn’t look like he’ll be retiring anytime soon after six decades in film. If anything he’s like any working class person, who never stops working. He once again teams up with his regular scribe Paul Laverty. The pair give an observation  the zero hour contracts and gig economy, that blights Broke Britain.

In Sorry We Missed You, we find ourselves back in Newcastle, following the Turner family. Ricky (Kris Hitchens) was a former construction worker, worked all his life on building sites. Now unemployed and decides to take up an ‘self-employed’ job as an delivery driver. Or should we say ‘independent franchise’ and ‘charge of his own destiny’. Those are the words from his depot’s boss Maloney, a soulless human being. Ricky can’t see the bigger picture, gruelling 14 hour working days, tight deadlines, no contract nor job security. He’s not his own boss and his every move is monitored. He’s not even allowed a day off  or get ill without finding a replacement driver, or face a fine.

His wife Abby (Debbie Honeywood) work situation isn’t any better. Her life is ran by the clock, a homecare worker with very long isolated hours. Looking after her elderly patients each who have an allocated time and be ready for them 24 hours. She had to sacrifice her car to help Ricky and now travels by bus, expenses her employer won’t even help with expenses.

The pair work very hard to provide the best for their kids. That sacrifice that leaves Seb (Rhys Stone)and Lisa-Jane (Katie Proctor) on their own, both with their own personal strife. Leaving the family at breaking point.

Related: Video Interviews – The “family” on making Sorry We Missed You

Sorry We Missed You unashamedly hits you with gut-wrenching heartbreak and anger. It asks to you observe not judge and see that the Turners are no scroungers, just victims of a vicious circle. One of unsustainable heartache of the gig economy, overworked, underpaid.

The cold-heart of the Tory government sits on their high moral horse preaching a strong family unit. When on the other hand what they have created working families to the grind. The family unit destroyed forcing families in to higher debts and tensions exploding.

Sorry We Missed You, is an authentically relentless heart-rending film. Highlighting the injustice, the enslavement of a government obsessed with Brexit and forgetting the people they should be looking after. Honestly engaging performances from the inexperienced cast.