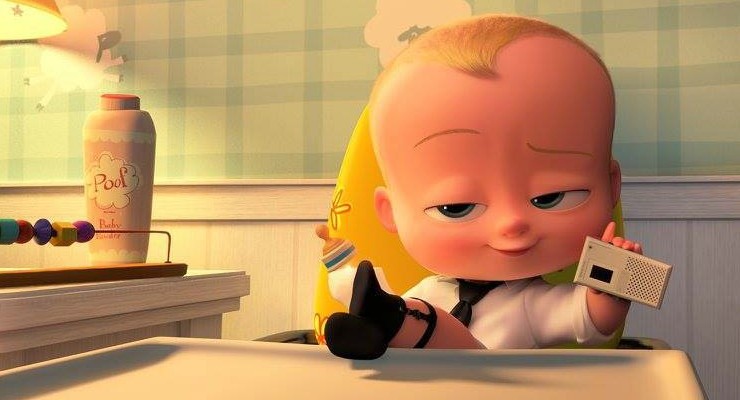 Boss Baby attempts to ask the question, “What if your baby was a boss?“. Throw in Alex Baldwin into the mix, you may want to ask the new question, “What if your baby was in Glengarry Glenross?“. Animated features are ten a penny these days, many forgettable and won’t raise a pulse this side of the Atlantic. Boss Baby is from Dreamworks Animation will be noticed but as a quirky kids movie, but one that could easily want to be political satire. Alec Baldwin‘s animated love letter to Donald Trump… his nappy years?

Boss Baby is based on Marla Frazee‘s 2010 book about Timothy (Miles Bakshi) a young boy who loves his life of adventure. Who has ultra-cool parents (voiced by Jimmy Kimmel and Lisa Kudrow), who love to play hip music from an era before they were born? Like the classic De La Soul ‘Three Is The Magic Number’ and it was something Timothy believed in. However, that magic was about to be broken when his parents introduce him to his new baby brother who arrives in a black suit?!!

From that minute Timothy suspected his new bro’ wasn’t whom he says he was, his mother didn’t show signs of pregnancy and the baby arrived on the doorstep. Like any great spy, Timothy lays out some traps and he laid in wait, waiting for ‘baby talk’ and his suspicions came true. Boss Baby (his actual name)reluctantly decides to reveal his identity, he’s middle management for Baby Corp and he’s here to stop puppies stealing the love from his infant ‘comrades’. Now get him a Tuna Sushi and an Espresso.

Boss Baby‘s first problem is its source, the Marla Frazzee book. This is an award-winning which we’re not criticising, it’s the fact an 87 minute movies have been made from a book that’s only 40 pages long. Already the movie is overstretched you wonder if the new material shoehorned to expand the movie is the political satire to home in on the parents. Alienating the movie’s actual demographic.

Using Alec Baldwin as Baby’s voice does work at first and delivers the best lines (mostly spoiled in the movie’s trailer). But picture you as the kid looking up at your parent belly out laughing this gets a little sinister and ‘Cookies are for closers‘, paraphrasing from Glengarry Glenross. The love-hate relationship with Baldwin and Donald Trump is no secret and some critics are stating this movie is nothing more than another dig at the U.S President. If you know Baldwin’s other characters, what we get here is more at home with Jack Donaghy his 30 Rock characters.

This movie should really have been a short movie and our final impression of the movie would have been completely different. Instead what we get is something that becomes generic, convoluted with a plot focused on sibling rivalry and jealousy. Newborn babies do steal the limelight from other kids or adults but never a political statement. If the ruling Conservative government got their way more here in the UK, they would indoctrinate children at a young age that Capitalism is good and it’s the future. In the end, they all get found out. Boss Baby sugar coats the fact it’s an overcomplicated mess. Let the kids grow up first before they get exposed to the evils of adulthood and if they ask, tell them it’s a ‘fake movie’