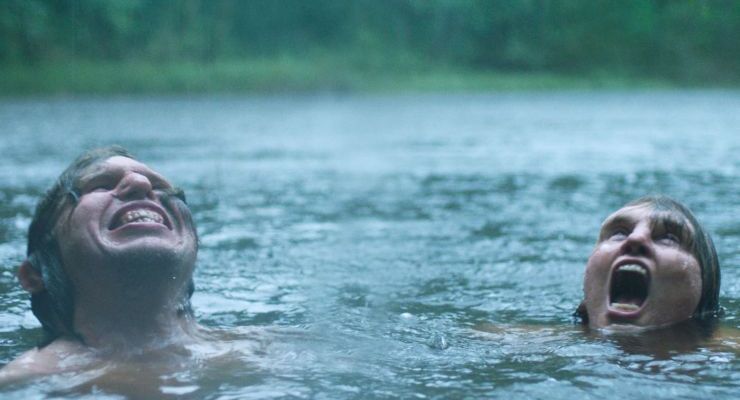 Who are we? Where Do I belong? Questions peoples ask universally every day. From gender, sexuality to ancestry. In Ali Abassi‘s Border (Gräns), a womans indentity is ingrained in Swedish Folklore. Probably the strangest uniquely surreal original film you’ll see in 2019!

Abassi’s film shares a lot with Ari Aster‘s Midsommar, in what genres can you put the film into. Apart from the sharing Sweden as the location, Border is a dark fairytale fantasy. This however is one strange beast of a tale regardless of the genre, grounded in social realism.

Based on the novel from Let The Right One In writer John Ajvide Lindqvist. We find ourselves in the Swedish port of kapellskär, Tina (Eva Melander) is an Customs Officer at the port. All day she stands around the ‘Nothing To Declare’ lane watching arrive off the ferry from Finland. Describing herself as ‘Ugly strange human with a chromosome flaw’. She does have the ability sniff out a contraband, evil or suspicious arrivals. 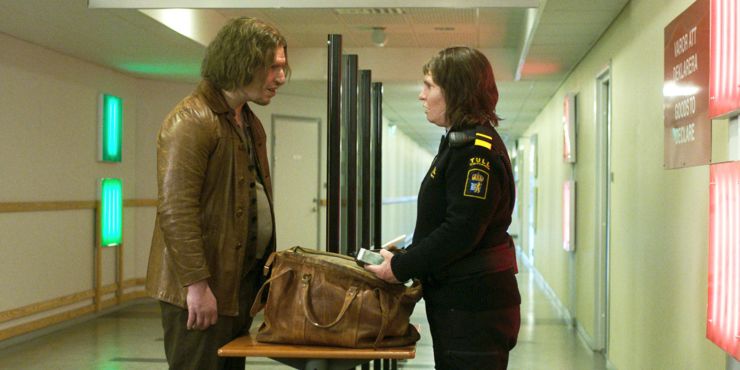 If you have a guilty conscience, Tina will smell you from a mile away. Not even her extraordinary sense could identify the mysterious but suspicious looking man Vore (Eero Milonoff). For the first time ever she feels challenged, but something deep down she is becoming attracted to him, forming a special bond. The strange attraction goes beyond the striking resemblance (Neanderthal). Vore offers Tina an opportunity to truly learn who she really is.

Outside her job Tina attempts to live as ‘normal’ life as she can.Despite her best efforts life is stagnant, living in a cabin in a remote forest. Living with her slacker boyfriend (Jorgen Thorsson), who treats his prize dogs better than her. Other times she spends with her ‘father’ (Sten Ljunggen)who is succumbing to Dementia. Deep down she knows he’s hiding the truth the ‘truth’ from her. When things get too much for her, Tina walks barefooted through the forest. It’s then she feels more connected with nature and the animals live there too.

Border is one of those films the less you know about it the better. Just knowing the basic synopsis does enough to entice you enough to learn more. The film does ask you to be patient heading off in several directions. So does life , a terrifying prospect for anyone. Tina has lived in an human environment since she was a child, Vore has opened her eyes to whom she truly is. At first she reluctantly follows him and an romance blossoms which lees to an eye catching sex scene. Guttural, graphic, primal, strange leading you to think Tina’s roots might be feral or even mythical. 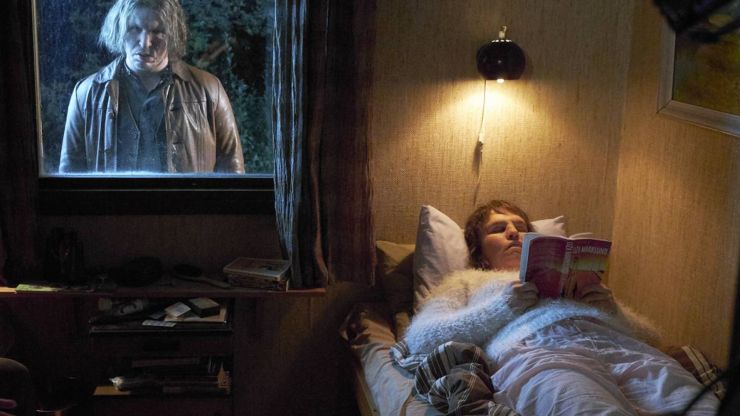 We spend the first hour of Border investing in Tina. Her life is mundane, full of hurdles, but one with plenty of emotion. One heartbreaking scene she confronts her ill father about the real truth about her life. Border does have many themes with identity, finding a place to fit in and call home. Also seeing life from an outsider something Abassi himself experienced been born in Iran.It’s also a journey of self discovery, loving yourself and accepting who you are. There is some deeper darker social political elements at play here too, especially those behind closed doors.

Next to a fantastic captivating central performance from Eva Melander and equally excellent Eero Melonoff. The less you know about the film the better you’ll enjoy this, floating between the dark and satirical. Border won’t be for everyone. If you watch it with no expectations, you’ll watch the most original, evocative, absurdly strange film you’ll see this year!