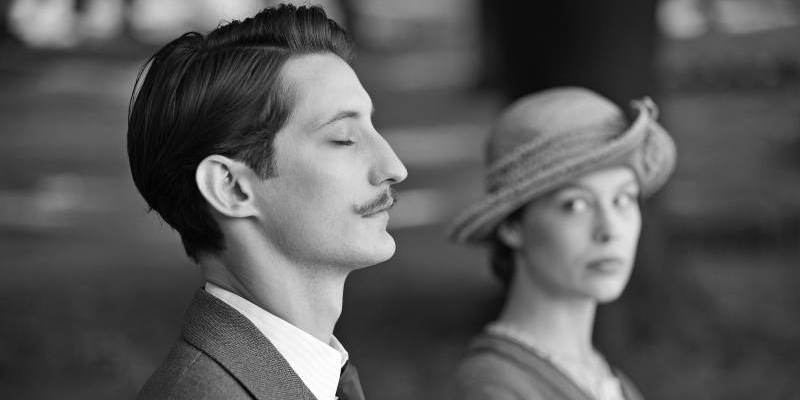 When it comes to war, history has shown the only winners are those in power who have taken their nations to warfront. The losers are akways those stuck in the middle, the soldiers and their loved ones. In Francois Ozon’s Frantz (2016) we visit that pain, guilt and grief post World War One, can we ever forgive?

Frantz is an reimagining of Ernst Lubitsch‘s 1932 poetic anti-war drama , Broken Lullaby. Set in 1919, we find ourselves in a small German town, World War One has ended we find Anna (Paula Beer) mourning at her fiance Frantz’s graveside. He was killed during the great war and Anna visits him every day and during one of her visits she spots a mysterious man laying some flowers. His name is Adrien (Pierre Niney), a Frenchman who claims to be a friend of her fiance.

Slowly overtime the pair start to bond, sharing their grief and pain together. Anna becomes more intrigued to learn more about Adrien and his relationship with Frantz. When the pair increasingly become closer, long buried secrets start to be unearthed. Threatening the fabric of their lives that will take them accross a wartorn Europe.

Many wars over our planets history if they weren’t fuelled by battles for resources or religion, Nationalism more likely be the reaso. Pride for your homeland and finding one’s indentity in our ever changing world. Even after this great war the world is still on tender hooks only for World War 2, hostility still rife . You can see this anger and rejection through Frantz’s father especially when he meets Adrien for the first time – “Every Frenchman is my son’s murderers“. No matter how much you dress it up, trauma is trauma. Regardless of what side of the fence you fought on, pain, anger and grief will always haunt you. Fear in what will happen nexts drives the townfolks and what is to come, they need a focus, their fragile too.

Is Frantz truly a anti-war film? Yes. We constantly see the pain, the devastation, the fear war has on people from the people in Anna’s town as well as her in-laws. Families ripped apart, morality , the guilt, life has certainly changed for everyone. The people are angry and Adrien becomes their focus to vent their hatred towards Adrien. Given birth to bigotry, questioning why did we go to war to only become even more angry?

What the film does do is show us, the neighbouring countries (France and Germany) they do share a lot culturally. War however makes them even patriotic be it for the greater good or bad. We see this through Paula and Adrien when they are together or when they visit the Louvre in Paris. Edouard Manet’s ‘Le Suicide‘ pops up several times during the film , the image representing a broken man , self destruction and futile self sacrfice.

The film’s other big question is it a romantic drama? Not really, it does walk the borderline of a love story. If anything it’s two individuals from both sides of the fence bonding, reflecting taking steps to heal the pain. Frantz is shot in monochromatic, colour breaks through into dreamlike scenes letting us their is hope. We do get teased with glimspes of ‘will he? won’t she?’ , deep down their friendship is purely platonic. The only true hints of romance is Ozon’s trademark homoeroticism which is quashed quickly.

Both Paula Beer and Pierre Niney are superb, delivering nuanced performances. Beer stands out especially who keeps the film from drowning in melodrama. When we first meet her she is grief stricken, vulnerable, as the film progresses she is a strong young woman determined to move forward shunning those old world traditions. Lubitsch’s film is considered by some to be a early feminist, Ozon’s film you could argue is the same.

Frantz does tackle head first many heavy themes. Regardless of what army or nation you belong to, pain, grief and devastation even hostility , senseless wars affect us all the same way. Francois Ozon’s may tiptoe through melodrama , unity and forgiveness might be to hard for many to accept. It’s the only wat we can move on