S.Craig Zahler is fast becoming the go to director for exploitative genre films, even if he calls them at times ‘Hybrids’. Bone Tomahawk a horror western, Brawl In Cell Block 99, a batshit crazy prison thriller. Now add Dragged Across The Concrete, that harks back to 1970’s violent pulpy thrillers. Another slice of corruption dented male pride, in a visceral slow burning violent thriller.

Life is unpredictable , no one knows whats around the corner, we just do the best with what we get. Life sometimes deals us one nasty card, this film is the story of two corrupt cops, who do so many wrongs trying to do right with even more wrongs. Twisting,  prodding your moral compass in so many unsavoury ways.

Dragged Across The Concrete stars  Mel Gibson as Brett Ridgeman and Vince Vaughn as Anthony Lurasetti. Two callous cops who find themselves suspended all thanks a social media video. A video that capture the disgraced pair mishandling a drug dealing suspect, leaving them with a lengthy suspension.

Ridgeman is a 27 year pro, extremely pissed off and feels let down by the system. Never offered any type of promotion, struggling to provide better for his family.  Wife (Laurie Holden) battling with MS, his daughter bullied by local thugs. Lurasetti he wants to marry his girlfriend but can’t afford a ring. Enough is enough for the pair as they descend into the criminal underworld for the money they believe they deserves.

This will probably be Zahler’s most divisive film to date. Many will think its a poison chalice not just for its story but having Mel Gibson in the film. It may be 10 years since he made that sectarian, racist comment many cinephiles can’t forgive. Ironically Ridgeman his character is a bigot in may ways like many considered him to be. Blaming everyone  else apart from himself for his woes, like a true Trump supporter.

Whilst this may not have the gore or the batshit craziness as his previous films, it still feels essentially a S.Craig Zahler film. The pace is slowy, feels cold, pulpy and more straight up than his aforementioned films. Yet it’s still brutal, like someone is slowly gutting your insides with a monster hunting knife. Dragged is more character focused that plays at a leisurely pace (2 hours 39 minutes), an enough time to appreciate all the main characters story arcs.

One might argue that Dragged Across Concrete is just another Tarantino-esque type of film, it’s not. Zahler maybe inspired by some of the same films, but he doesn’t input any of that fetishized Tarantino nostalgia or characters to sympathise with. If you love old Don Siegel films like Charlie Varrick, Death Wish or 52 Pick Ups you’ll dig this one. 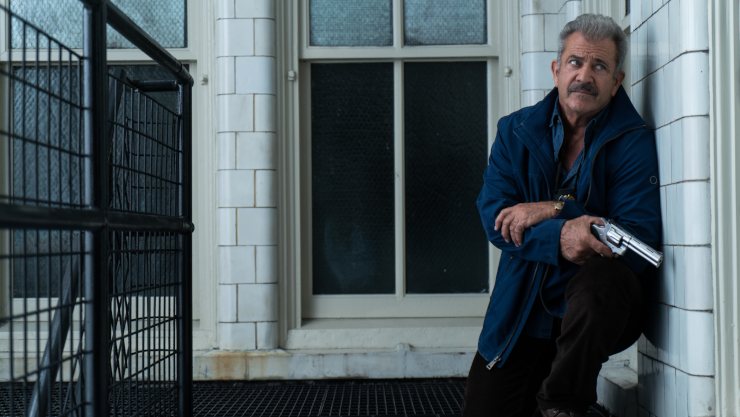 Dragged Across Concrete is a stake out film that slowly reveals the players and asks you to understand their motives. You will probably feel conflicted especially when you realise its mostly all about toxic masculinity, how they become consumed with hatred.

Gibson and Vaughn chemistry is sharp, believable and they can even insert some dark humour . There is one scene when the pair are on stakeout and Ridgeman delivers a deadpan quip to Lurasetti eating a sandwich: “A Single Red Ant Could Have Eaten that Faster!”

Dragged Across Concrete is a nihilistic noir that reminds those in humanity, it’s time to live in the 21st Century. Not the 1970’s!