Netflix can be a wonderful place to discover those ‘blink you miss’ cinema releases or those films that deserve a bigger audience. After watching Stanley Tucci‘s A Quiet Place clone The Silence, I stumbled across Final Portrait (2017). A little known charming indie directed by Tucci, probably seen more on the Festival circuit than cinema. Starring Geoffrey Rush as renowned Swiss Artist/Sculptor Alberto Giacometti and Armie Hammer as his friend writer/Art expert James Lord.

In Final Portrait, we find ourselves in Paris 1964. Giacometti invites his American Lord over to Paris who is keen to write a piece on him. Giacometti agrees but with one condition that, Lord will sit for him to paint a portrait. Lord reluctantly agrees and those few day the artist says will takes becomes a week. Only to become a few weeks  leaving Lord worried about his friend.

First question anyone will ask “who is Alberto Giacometti?“. Unless your educated on all things  Art, his name will be strange to you. Always good to educate yourself a little to appreciate the story but also his motivations and performance from Rush.

Giacometti was a distinguished figure in 20th Century sculpting world. Highly influenced by Cubism, Surrealism and the sculptures he made were no more than 3 inches in size.The size represented the distance between artist and model. When it came to his paintings, he wasn’t inspired by any styles just work that was monochromatic. 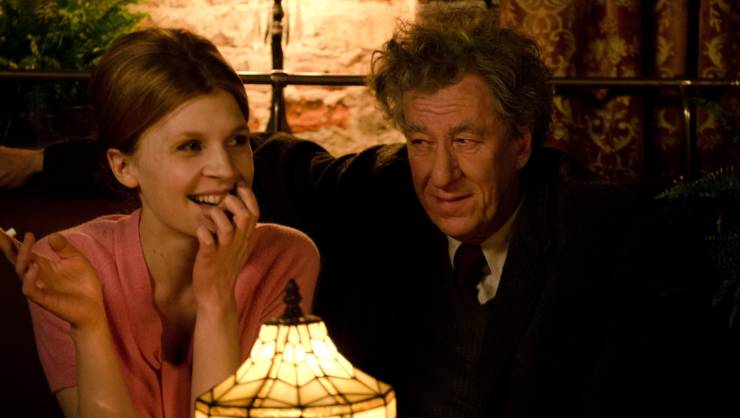 Geoffrey Rush is superb as the wildly eccentric artist, delivering an array of emotions. He was a man plagued in self-doubt and Lord saw this constantly throughout the film. You didn’t know what version of Giacometti you were going to get that day. Every day was different but most of all he was a grumpy old man. Armie Hammer gives an assured performance as James Lord, who had a patience of an saint when dealing with Giacometti. Was it his determination to get that elusive story on his friend? Or was he simply in awe at being in the presence of artistic master at work?

Final Portrait is two things: One an cathartic insight into artist’s world as we watch him create but also frustrated. We also visit the places where Giacometti  loves to go to reflect, to eat and meet people he associated with. He hide nothing from Lord including his fascination for prostitutes and one particular muse, Caroline (Clémence Poésy). Whilst in the background his long suffering wife Annette (Sylvie Testud) looks on in silence.

The other way you can look at the film, its one about an unique friendship between an artist and his friend. A profound, touching story of artist opening up not just into his personal life but sharing the love for creativity.

Final Portrait won’t be for everyone, It’s subtly comical, that never rises above that lazy Sunday afternoon tone. A slice of life that feels like an chapter from Samuel Beckett’s Waiting For Godot.