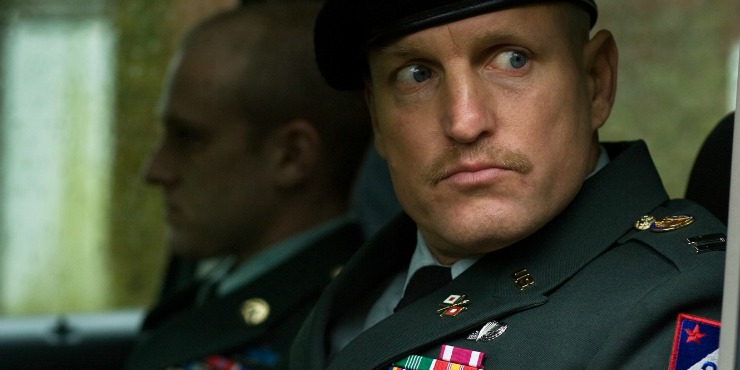 There was a time when wars were justified (World War 2), other times we have no clue why they went to war but more recently though they tried to say it was reasoned unknown. We know that a certain grey-haired redneck psychotic Texan was responsible simply down to his greed of other countries natural resources making this world a more dangerous world to live in. We can argue to we’re blue in the face on the rights or wrongs of war but the death of a loved one killed in action you can’t describe the emotions you or worse the families that are just about to be informed their son, daughter, brother, sister wife or husband is dead, but whose job is it to inform the families of the devastating news? The Messenger.

In Oren Moverman’s debut drama The Messenger Woody Harrelson and Ben Foster are those messengers or American Army’s ‘Casualty Notification Officers (CNO) whose task is to tell the families have been Killed in Action (KIA) from the media. Ben Foster plays Will a young Iraq veteran emotionally scarred who is ordered to see out his remaining 3 months of service at the CNO under the wing of Captain Tony Stone (Woody Harrelson) a recovering alcoholic who follows the job by the book never straying from the script for any one. Will is the total opposite of Tony, emotionally fragile compared to Tony’s stone-faced no emotion which is fine for the job he’s been doing, a job that keeping an emotional distance from the families you inform but Will doesn’t respect that eventually finding himself empathising with a newly widowed Olivia (Samantha Morton).

The Messenger is a rarity in war-related films as it deals with the impact of war with the loved ones back home and even to a certain degree the post-traumatic effect of returning soldiers too. The film is a harrowing study of grief, guilt, emotion of our families in waiting as well as our Messengers Of Death, first allowing us a voyeur’s from the Messenger from the Knock on the door to the varied reactions of the families which tore some to outright resentment. At no time does anything feel false but Moverman leaves us to decide what method of ‘breaking the news’ is humane: the mechanical insensitive military approach stripped of any emotion or the hands-on approach that Will wants to endear.

The Performances of the cast is what will attract you to check this film out. Woody Harrelson brings a streak of deadpan coldness, funny man who is also a lonely person crying out for some one for him to be a role model too but most of all a friend (which we see the benefit of in the second half of the film which becomes near enough a’ bromance’).Harrelson is no longer that simpleton barman from Cheers but an actor worthy of major accomplishments and if wasn’t for this film coming out in 2009 he would grab that Oscar (which went to Christoph Waltz for Inglorious Basterds). Ben Foster is the yang of Harrelson’s Ying they maybe opposites attract but  the balance the film needs, a subtle, mentally fragile destructive man who highlights the soldier’s trauma coming home from war, something society seems to ignore these days, this film proves he better than the generic film parts he constantly gets. He may only be in this as a cameo but Steve Buscemi’s 5 minutes on the screen is terrifying superbly poignant as the angry father resenting the message  Tony and Will delivered only to later realise ‘don’t shoot the messenger’ as for Samantha Morton she also delivers a fine performance as the insecure widow scared to show her emotion only to fall under Fosters spell.

The Messenger is a slow but powerful film highlighting the part of war we seem to forget, a perfect partner to any film that  plants you in the heart of the trouble watch Platoon, The Hurt Locker then watch this after your views on war may change  or at least make you think about the effect of war will have on you mentally. An authentic piece of filmmaking made more realistic that the director is a former soldier himself, a tragic tale of humanity that war may bring peace or stability to a nation, but may bring you or your family a lifetime of hell.