When it comes to movies that start as a novel than the movie I’ve got a tendency to see the movie read the book, I did this with Lord of The Rings & Harry Potter franchises and enjoyed them better. When you read the book first and go then see the movie you will just go through the movie constantly been judgemental picking at the movie saying “that was never like that in the book” or “they forgot to put… in!”. So it’s better to watch a movie with a clear mind and appreciate what is on the screen. This has been a major criticism of THE ROAD, which I’ll talk about a little bit later on.

The Road is an terrifying vision of the demise of humanity. The world is strewn with shades of grey, drained of its life and essence, with any ray of sunlight been blocked by the massive grey clouds of ash. How the earth was devasted we don’t know apart from knowing a named catastrophe occurred scattering any remains of humanity. Thos unfortunate to survive, do it anyway they can with all morality and ethics stripped away.

The movies two main protagonists are simply called Man (Viggo Mortensen) and Boy(Kodi Smit-Mcphee) reluctantly raised by the man and his wife (Charlize Theron) in this world with death the only thing you can look forward too. Ten Years has passed and Man & Boy trek the vast wasteland via the empty network of roads through the mass decaying monochromatic landscape. They scrounge every house, bin, items for the littlest scraps of food like a rat or hungry desperate animal.

The main criticism of the movie has been the comparison between book and movie. When researching this movie I came across an video interview that director John Hillcoat did for Rotten Tomatoes UK (the interview . He clearly states that THE ROAD was not originally made for the big screen compared to McCarthy’s other book -cum- Movie No Country For Old men which was made as a screenplay then the book which is why the Coen Bothers were able to adapt a fantastic play onto the big screen. As for The Road McCarthy give Hillcoat creative License to create his vision of the book and I have to say what I’ve learned he still pays homage to the novel as well as creating a very complimentary piece of film. 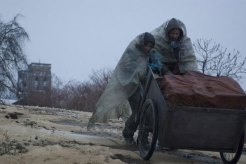 This does show that the medium of film and writing are similar but also very different. With a book, you can create a bleak haunting visual in someone’s mind with a few creative words letting you visually in your mind create what the author is saying. With a movie it shows what the director has perceived from their vision and sometimes the viewer and director may not think alike.

Hillcoat has created an excellent version of the road, visually breathtaking, bleak but also very beautiful in its own grand Jure way. The use of the old deserted mining towns, motorways and mines give you the authentic feel which is near close to what NcCarthy created in the book.

There were a few things I really admired about this movie. The first was not actually naming the apocalyptic event that destroyed the world, this actually warns us that this may be a fictional story but how the earth becomes the vast decaying wasteland could actually happen. Be it a nuclear attack or be it a natural disaster is basically left to you the viewer, but if you look closely there are clues to suggest it could have been either devasting event.The other was also not giving the movie’s characters an actual name, it’s like a personal touch. The man, wife or boy could easily be you and what the movie is saying to you, “could you live like this?”

Using The wife (Theron) only in the flashbacks was another genius move, it lives on the notion of Motherhood and the bond with the boy. You never get to learn how much the boy knew about his mother, she is an urban myth at times. It also shows how brutal the world became when she can’t go on, there is a scene when man and wife are sitting at the table and she confronts man

“Sooner or Later they will catch up with us, they will kill us!!”, “They will rape us and kill us and eat us! you won’t face it!!!”

this scene was emotionally terrifying and shows the future they have ahead. Actually only giving a suggestion about the cannibals rather than constant scenes did go down well with me. It shows that the world is lawless but also portrays the cannibals themselves as urban legend keeping the fear with the good people. 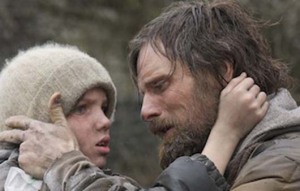 What we must not forget The Road is a lot like Dracula, we think it’s a horror movie but it’s an actual romance movie, the road is actually an intense father-son story who try and keep some form of humanity alive. Bring Moral value and what’s right or wrong despite it now been a lawless world. Like any parent, they will bring their child up what they see best by. The boy only knows what’s right through what his father has experienced. He learns him to trust no one they mean they are the bad guys but we are the good guys. What father doesn’t realise the boy is too compassionate still a glimmer of human in the boy when the fathers objective is sometimes to be cruel to be kind attitude.

The real touching moment of their relationship is the can of coke they find and share, the boy says “you did good papa” this makes you think twice to appreciate what you have in the financial crisis and remember things like drink, sweets and alcohol are luxuries.

As ever Viggo Mortensen is a man on a mission and give a performance of a lifetime, bringing solidness to the movie as the determined bold father figure, very convincing. But my hat goes off to Kodi Smit-Macphee a newcomer to the industry who gives a great screen presence and I was astonished to read many of the scenes his did with Viggo were improvised ! many experienced actors struggle to improvise, this boy has an bright future ahead of him.

When Hillcoat directed The Proposition it was the birth of a nation (Australia) and the turberlant times they have ahead creating new home, The Road is the exact same but the end of the world. The end of humanity, the characters living on memory, questioning their morality as well as asking us to quiz our own if we were in their shoes. This was an enthralling original story which had its faults but in my eyes not enough to deem the film a failure. Its would be good to see the movie then read the book and possibly see the movie again or vice versa and with this, you will appreciate the written masterpieces as well as the visual masterpiece.